Spoiler alert.
If you already read Soaps.com's article Erin Chambers Out At General Hospital, you know that Anthony appearing in Siobhan's hospital room means the end of her this week. I have to say I'm a little surprised they are killing her off, as I thought they were testing her chemistry with Ethan. He certainly could use a storyline. I also thought her nosebleeds were going to lead to a bigger explanation for her personality change. However, that won't be the case. I can't say I'm too sorry to see her go. She had promise in the beginning, but she's been turned into a shrew, whose only purpose is to yell at Elizabeth and nag her husband. It would appear Lucky is now free and clear to reunite with Elizabeth, which is what the writers seem to be pushing.

Chemistry test.
Not only did I wonder if they were testing Ethan and Siobhan's chemistry, but it would seem they are trying out Carly & Shawn's and Elizabeth & Matt's as well. I have to say I'm not feeling either pairing. Not even on a friendship level. It's too bad because while it's likely Liz and Carly will always have romantic partners to fall back on, I'd like to see Shawn paired up with someone he jumps off the screen with. Carly's not it in my opinion. And, despite Matt acting like a spoiled brat at work these days, I like him and Maxie together, but they don't seem to be moving that couple forward. Matt has the potential to be a really fun character. He just needs someone to play off of, who he sparks with and who Garin Wolf will write for him with. Like Carly with Shawn, I don't think Liz is it. What do you think? Vote in our General Hospital Poll: Testing the Waters.

Getting real.
The fun at Jake's continued last week, as Alexis, Diane and Mac waited out the storm with Coleman. Things turned a touch more serious though, as Coleman and Alexis discussed chemistry and loneliness, while Diane and Mac talked taking risks in life and love. These were truly great moments as the dialogue and performances revealed very relatable chinks in all four of these characters' armor. If only we could get more scenes like these. And speaking of chemistry tests, was it my imagination, or was there a spark between Alexis and Coleman?

Aside from enjoying watching Dante and Lulu just get to be happy and enjoy each other, for once scene anyway, that's all I got. What did you think of last week's "General Hospital?" Feel free to share your thoughts below. 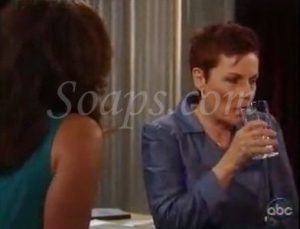 Last week moved some plots forward, while sort of idling Jason’s story in anticipation of the upcoming fantasy scenes. That fun begins next Friday when he undergoes surgery due to the foreign object in his brain. While we wait for that fun to begin, let’s get to what did happen in Port Charles last week.

Turning the tables.
In a nice change of pace, Dante arrested Sonny for assaulting him and, I think, for tampering with Jax’s plane, which crashed. Although, to be fair, Jax took the risk by flying the plane after seeing the tampered wires. Not that Sonny wasn’t going to have him killed anyway, but still. It was refreshing to watch Dante call Sonny out on all his crap and not buckle under his conflicted feelings about this father like he usually does. His line that Sonny’s whole life was an abuse of power was the most spot on thing I’ve heard on this show in a long time. I also dug the scene of Jax confronting Sonny in prison. I loved watching Jax get tough with Sonny, without sounding like the whiner he’s been for the past few months. I was disappointed it was a dream though. I was hoping Jax was letting Sonny know he was alive, but he was going to make everyone else believe Sonny caused his death as payback. He did turn up in the flesh at the end of Friday’s episode though, when Skye found him passed out on the docks. I’m curious to see where Jax goes from here. I wouldn’t mind if he just stuck around.

On her own.
Speaking of Skye, she’s been rattling Tracy with talk of her nemesis’ past with Gino Soleito. This will somehow benefit her, which is somehow connected to Anthony. Those details aside, I’m intrigued as to why they’ve brought up this aspect of Tracy’s past and where they are going with it. It’s fun to watch the women go at each other and even more entertaining to see Tracy in her very own storyline. One that doesn’t involve her louse of a husband Luke. Read more about her past at Tracy’s History With Gino Soleito. 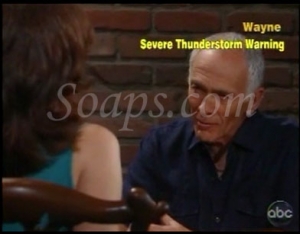