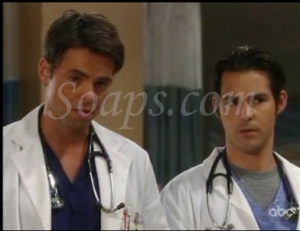 I don’t have strong opinions, good or bad, about what happened last week in Port Charles. I still feel like everything that is going on is build up to hopefully a really good story that will grab me. I’m definitely still enjoying the character interactions and see the potential for what’s to come, so let’s break it all down.

Tunnel vision.
I’m going to assume that Sonny is still off his meds since he ran around Port Charles like a crazy person with the sole intent of tracking down Jax. He pretended it was to get Josslyn back, but we all know it was because Sonny blames Jax for Brenda leaving. Sonny’s lowest point, of course, came when Sam told him about Jason’s accident, but Sonny’s rage seemed to drown out her words. He left the hospital without seeing his BFF and then punched out his son Dante on Jax’s plane. Time to start popping those pills Mr. Sir.

Strained work environment.
Robin’s new job has moved her from being an overeager, micromanager to getting caught in the middle of Matt and Patrick. I’m liking the latter dilemma much better. It’s more interesting to watch the dynamics play out between Robin and the egotistical doctor brothers, than to watch Patrick, Matt and Steve whine about their overbearing, uncompromising, female boss.

The battle for Jason.
Another power struggle brewed, as Sam, Monica and Carly tried to assert their importance in a comatose Jason's life. I kind of enjoyed Sam's smackdown of Carly, who, immediately after the accident happened, needed Jason to be okay so he could help her find Josslyn. I appreciate her history with and love for Jason, but her selfishness is pretty hard to ignore sometimes. When it came time to decide the best treatment plan for Jason, Carly was rightfully squeezed out of the equation, leaving his fiancée Sam and mother Monica to battle it out. I enjoyed their scenes as the women found some common ground while respecting each other's place in Jason's life. It was a great parting shot of Sam, Monica and Edward watching over Jason's surgery together. While I don't want him to revert back to Jason Quartermaine, and I really don't think he will (just a hunch), I'd love to see him try to navigate a real relationship with the Qs, as he retains his Stone Cold personality.

Personality switch.
Lulu finally met Jackal P.I. and was more amused by Spinelli's new persona than anything else. Maxie of course grew jealous of The Jackal's interest in Lulu, which makes me think Lulu could be right and Spinelli is just putting on a show for his former non-wife Maxie. Although, he's taking it a bit far if that's what he's really up to. What do you think? Vote in our General Hospital Poll: Is Spinelli Faking?

Fun at Jake's.
Alexis and Diane were stranded at Jake's during the storm, allowing for some much missed comedy between the old friends. Coleman was only too happy to entertain the ladies, which I was only too happy to see. Mac walked in on them playing strip pool, which Alexis seemed to be handily winning. I'm sure Diane had no problem stripping down to her lingerie, which looked like something she borrowed from Lulu during her bordello stint. The Brusque Lady of Justice certainly looked pretty hot in her skivvies and Coleman looked more than happy to be stripping for the "cougars." Hopefully, the fun will continue next week.

Aside from being thrilled that Lucky stopped tripping out, and feeling bad for Jax having to give up his daughter, but ultimately just glad that story is over, that's all I got this time around. What did you think of last week's "General Hospital?" Feel free to share your thoughts below.