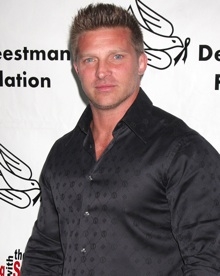 On August 26 and 29, fans will get to see how things could have been had Jason never become Sonny’s number one enforcer. Per Steve Burton’s interview with TV Guide, as Jason undergoes brain surgery, Sam (Kelly Monaco), Carly (Laura Wright), Elizabeth (Rebecca Herbst) and Monica (Leslie Charleson) fantasize about how different things would be if Jason hadn’t gone down that dark path.

Of the scenes, the actor previewed, “I think this idea has always been in the viewers’ minds. What if Jason got in another accident? How would he wake up? Would he return to his old self? So we’re doing some cool stuff with that. With the exception of Sam, who doesn’t want Jason to change at all, everyone wants him to be somebody else.”

It seems this is how Stuart Damon returns as Alan, as Burton teased a good old fashioned Quartermaine argument that takes place in the Q living room. Apparently the scene involves Monica, Alan, Tracy (Jane Elliot) and Edward (John Ingle).

Are you looking forward to seeing the “What if…” scenes? Vote and comment below.