A Fan Event in California that Will Help Around the World 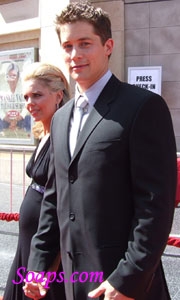 General Hospital may have said goodbye to Coop’s Jason Gerhardt, but fan’s can still come out and support him as he lends support to a cause that needs more help than ever – World Vision. Tickets are being sold now for “An Evening with Jason Gerhard and Friends” and a large portion of the proceeds will go to the Christian humanitarian organization that has been rushing to the help of the world’s children in need since the 1950’s. In addition to their global child sponsorship program and work in caring for AIDS orphans in Africa, World Vision is now assisting Myanmar cyclone survivors as well as those affected by the earthquake in China.

Jason’s fan event will be on Saturday, July 12 at 7:00 PM for his fan club members and 8:00 PM for people who aren’t members. It will be held at Morningstar on 11000 Ventura Boulevard in Studio City, California. (For those of you who are familiar with the annual GH Fan Club Weekend at the Sportsman’s Lodge, Morningstar is just 2 miles to the east.) Jason promises the evening will be full of surprises which includes a silent auction for fun prizes, a Q&A session, dancing, Karaoke and plenty of photo opportunities. To order tickets, send a money order ($65 for members, $75 for non-members) made out to “The Official Jason Gerhardt Fan Club” and a self-addressed stamped letter-sized envelope to: An Evening with Jason Gerhardt and Friends, c/o The Official Jason Gerhardt Fan Club, PO Box 1781, Garner, NC 27529. Be sure to include the name, email address and phone number for each attendee as well.

Fans events are a great way to come out and get to know your favorite soap actor and help a good cause at the same time. Check out some of the recent efforts by some of General Hospital’s best and brightest: Supporting Children in Arts, Human Rights, Hurricane Katrina Relief and Walk for AIDS.

Soaps.com congratulates Jason Gerhardt and all of his former cast mates for doing their part to make the world a little better for everyone.

GH Actors Update: Where (Else) Can...