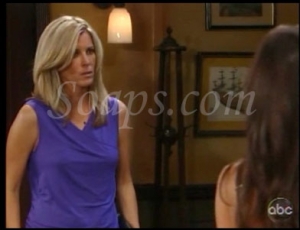 I have been enjoying all the character development on “General Hospital” over the last two weeks, but now I need a griping storyline to go along with it. I am encouraged by the changes already made and am enjoying the balance of characters and plots throughout, but I sort of feel like everything on the canvas is just a big history lesson until we get to something good. Due to the changes already made though, I remain hopeful, so let’s break it all down.

A new man?
I was left a little perplexed by Jason’s behavior towards Carly last week. I agree boundaries need to be set for her when it comes to him and Sam and it’s nice to see him put Sam first, but, for me, the scene didn’t really jive with the Jason I’ve known all this time. I feel like he would have at least talked to Carly privately about the engagement, if for no other reason than to make sure she didn’t freak out like she did. He seemed to just dismiss her feelings and go along with Sam, which didn’t feel right to me. Thankfully, he left Sam at home when he went with Carly to look for Jax. This of course led to them getting into a car accident. It seems Jason will have some medical issues, which has led some to speculate he will revert back to Jason Quartermaine. While I’m all for Jason reconnecting with his family, I hope that won’t be the case. Jason Morgan is who we’ve come to love over the years. Jason Quartermaine was just a nice guy who wanted to be a doctor. Kind of bland. I will weep openly if we never get to see Stone Cold’s exasperated expressions or annoyed eye rolls again. Do you think Carly was right to be so upset with Jason? Vote in our General Hospital Poll: Jason’s Behavior Towards Carly.

An explanation for everything.
Apparently Sonny has been acting like such an ass lately because he’s been off his bipolar meds for the last three months. Is that why he set Jax up? Or is that just his nature? I kind of believe it’s the latter, but we do have to root for Sonny at least a little bit, so I guess that explanation is as good as any. My question is though, why exactly did he go off them in the first place? Was it all the stress from the Suzanne/Alec debacle?

Like father, like son.
Michael trying to emulate his father by wining and dining Abby on the island makes sense to me. I don't necessarily believe he'd take to a life of crime that could send him back to prison, but I do think he'd be impressed by his father's wealth, influence and effect on the ladies. I can see Michael's sense of entitlement, especially at ELQ, coming between him and Abby. It's an issue that could realistically ruin their relationship since Abby has struggled for everything and wants to hold on to her job based on her merits, not because she's the Quartermaine heir's girlfriend.

Back in the fold.
Skye returned last week. I've always liked the character, but I'm not sure why she's working with Anthony, of all people. Hopefully it will be interesting to find out. Whatever her reasons though, I just hope she has an actual purpose on the canvas this time around. Her last visit, which she spent searching for Alcazar's money and flirting with her exes, was pretty lame.

Wanting more.
As for another character with no real purpose, Shawn popped up again. I'm not entirely sure why he's so passionate about keeping Carly and Josslyn safe, but at least he's been humanized a little by the reveal that he was a teacher before he joined the service. We also got some real emotion regarding the trauma he suffered during his time at war. Now, they just need to give him an actual story. I wonder if he will become either Michael and Kristina's college professor or Morgan and Molly's high school teacher. Or are they still in middle school? I'm not sure how old they are supposed to be. Maybe Shawn can start up a work place romance too while he's at it.

Aside from enjoying seeing flashes of Spinelli behind The Jackal's façade and dreading watching more of Lucky tripping on drugs this week, that's all I got. What did you think of last week's "General Hospital?" Feel free to share your thoughts below.