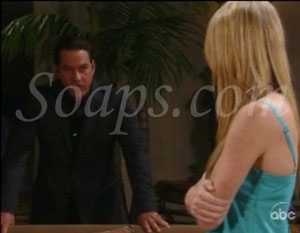 Not getting off the hook so easily. (Soaps.com)

What a difference a week makes! Garin Wolf’s episodes as head writer finally started airing and it’s like a whole new show. I had been feeling like there was a dark cloud hanging over Port Charles lately, but it seems to have passed. This week’s blog is heavy on the rave side of things, which hasn’t happened in some time, so let’s break it all down.

A brand new day.
Garin was clearly sending out a message to his fans as his very first episode as head writer on Tuesday featured Helena, who actually felt like a formidable presence again, Nikolas, who had been given his best stuff in quite some time, Monica, who finally confronted Jason about Jake and Robin and Patrick, feeling the love and hopefully ending the silly Robin as a tyrant storyline. The rest of the week was equally as great. Sure, it was a little awkward at times to hear some characters trying to fit so much history into their conversations, but every single person referred to their past in every episode last week. And there was no mob activity. It’s clear Gavin Wolf is telling the fans he’s on their side when it comes to history, character and story. I for one am excited to visit Port Charles every day again. What do you think? Vote in our General Hospital Poll: Reaction To Garin Wolf As Head Writer.

As he should be.
I’m not sure if we’ll be seeing more of him, but from the first scene of Nikolas emerging from the shadows on the island to talk to Lulu, I had faith the real Nikolas had returned. The ensuing scenes of him going up against his grandmother, who actually felt like a genuine threat instead of the cartoonish villain she’s become, and sharing his bitterness with Lulu over his role in the family is how he should have been written all along. Sure, I’m glad he has a relationship with his siblings and has a heart, but he should have always felt like someone you did not want to cross. I loved the Godfather-esque kiss he gave Helena, telling her to not bet on what he would do next. I don’t care what he does, I just hope we get to witness it.

It's about time!
How great was it that in Garin Wolf's first episode as head writer he had Monica confront Jason about Jake? He obviously didn’t want to waste any more time denying fans what they have been wanting for so long. I do have to admit I wasn't as moved as I thought I'd be, but it was so nice to hear Monica talk about Alan and the person Jason used to be. That conversation about the Qs felt like a sign of things to come. I don't want him to revert to the Jason of old, but I would like to see him interact with his family more. It was also nice to see Monica give Elizabeth some tough love on keeping the secret about Jake from her and not sympathizing with her plight. I only vaguely remember how it went down, but many posters were a little upset that Elizabeth put the blame on Jason for not telling her she had a grandson. Pretty interesting that they did a little revisionist history there. Or was Elizabeth just trying to cover her butt?

Toned down.
Even Anthony Zacchara is growing on me under Garin Wolf's regime. I never much cared for Anthony's over the top crazy antics, but I have always liked Bruce Weitz as an actor. I felt like I finally got to see that again when he had a rational and calm conversation with Tracy. It was hilarious to watch him flirt with the uptight Mrs. Spencer, who seemed to be more affected by the mobster than she'd like to admit. If we can get more of this version of Anthony, then I won't mind having him sticking around Port Charles for a bit longer. Although, I do hate what he did to Lucky.

The weak link.
The only down side to last week for me was the Elizabeth/Lucky/Siobhan storyline. I hate that Siobhan has turned into a shrew and that Liz is always the victim. I really hope Siobhan's caustic personality is just a symptom of whatever is causing her headaches and nosebleeds because I'm not understanding her sudden angry, hateful demeanor. She might have a point or two where Elizabeth is concerned, but she wasn't this mean before. I also don't want to see Lucky succumb to his addiction again, so I was relieved the drugs were forced on him, instead of him voluntarily taking them. I just hope he can recover from this setback quickly and not go on a downward spiral. As for Liz, she needs a storyline where she has a backbone and doesn't constantly rely on men.

All in all it was a great week in Port Charles with the promise of more good things to come. Do you agree? Feel free to share your thoughts below.