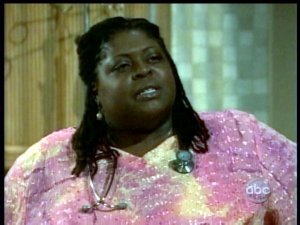 As avid soap fans, we all know that TV relationships tend to adhere to a sense of heightened reality when it comes to depicting family dynamics (and dysfunction!). SOAPnet has put together the best examples of this in a six-week series called “Relative Madness” that uses clips from the most notorious family flare-ups that TV has to offer. Tonight’s segment is called “It’s a Sibling Thing” and General Hospital’s Sonya Eddy (Epiphany) is among the celebrity panel that offers commentary between clips. Also on the panel are Ana Ortiz (“Ugly Betty”) and Joy Behar (“The View”) among others.

The siblings highlighted in the clips will be pulled from real life and fictional characters and General Hospital’s own Nikolas Cassadine, Lucky & Lulu Spencer will be among them, as will The Young and the Restless’s Kevin Fischer and Michael Baldwin. To represent the real-life siblings, Jessica & Ashlee Simpson as well as Paris and Nikki Hilton will appear via clips.

“Relative Madness” airs on Thursdays at 11:00 PM (ET/PT) on SOAPnet. General Hospital characters will be highlighted in later episodes too, so you might want to tune in every Thursday from tonight through June 12. Familial nuances involving the Quartermaine family, Luke & Laura, and Dr. Noah Drake are among those to be featured in the weeks to come. For the complete story on the series, go here: SOAPnet’s “Relative Madness”.

As for tonight, it will be great to see Sonya Eddy as herself instead of the ever-grouchy Nurse Epiphany, don’t you think?

A Fan Event in California that Will...