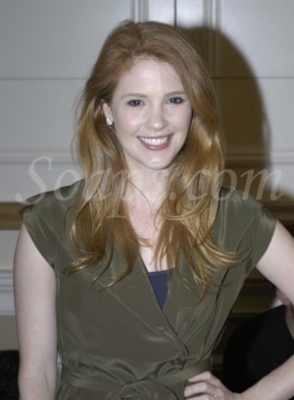 “There’s a different kind of tone to the whole show.”

Erin Chambers previewed what’s to come for Siobhan for Soaps.com at the General Hospital Fan Club Main Cast Event. Find out the changes you might see in her character, as well as her accent.

Soaps.com: Siobhan is kind of caught between Lucky (Jonathan Jackson) and Liz (Rebecca Herbst). What can you tell us about what’s going on with her right now?

Erin: Well, you said it. She’s kind of in the middle of this whole Lucky and Elizabeth drama. She feels like she’s probably losing Lucky and she doesn’t want to do that. She’s fighting for him and trying to figure it all out. We’re doing a lot of really intense stuff.

Soaps.com: Do you think she’s actually in love with Lucky or is she still trying to figure it out?

Erin: Oh, yes. Yes. She definitely loves him. She wants to be with him, but if it’s not going to be reciprocated and she’s going to have to fight for him, it makes it difficult.

Soaps.com: Are you seeing changes to your character now that Garin Wolf is the head writer?

Erin: Yeah. I would say that there’s a different kind of tone to the whole show. Yeah, I’ve definitely seen changes to my character. When she entered the show, she was pretty feisty and energetic. She was very dynamic. Not that it went away, but I think other storylines brought out different sides of her. Like when Jake (Edward/James Nigbor) died and Lucky lost his dad, you saw this other side to her. It was very supportive and sweet and very caring and all of a sudden she feels like Lucky is being ripped from her and she’s kind of reverting back to that, ‘Wait a second!,’ attitude. She doesn’t like shrink in the corner. She puts up a good fight.

Erin: Yes. I do. I think it’s more fun to play. And there are sides to myself that are like that too. It’s always fun to reach down inside and play intense stuff you don’t normally get to do.

Soaps.com: Did you have to do a lot of work on the accent?

Erin: No, because I got my BFA in acting and in my program we learned dialects. We learned British, Irish, German and French. I did pretty well on the British and Irish. German and French, not so much. [laughs] Apparently my German and French sounded Chinese. They weren’t good accents. [Irish] was just always an accent I could do, so when I got the audition I was like, ‘Oh, easy.’ There have been times when the accent has been hard especially when…I think doing heightened emotions it’s always a little bit harder, so it makes it a challenge and I think it’s always good to be challenged in your craft.

Soaps: Will you be keeping the accent or will it be phased out?

Erin: I don’t know if people have been noticing, but as the show has been going, I’ve been softening the accent. When I first started it was really strong. There was definitely a very distinct lilt to it. I was doing a country Irish accent, which kind of can be likened to a southern accent that you see in America. Not that they are the same, but in terms of how there’s different dialects in every region of the country that’s what I would maybe compare it to. But as the show has progressed, I’ve really lightened it up. I don’t know if people can tell, or if not, but I have been lightening it.

Soaps.com: Is that your choice?

Erin: It’s my choice, but I talked to Jill [Farren Phelps, executive producer] about it and she was all for it. I know that they approve. I haven’t gotten in trouble about it yet.

Check out Soaps.com’s interview with Lisa LoCicero. Join us on Twitter @soapoperafan, and Facebook. Come tweet and Facebook with us about “General Hospital,” all the other soap operas, “Glee,” “Grey’s Anatomy” and “Vampire Diaries!” 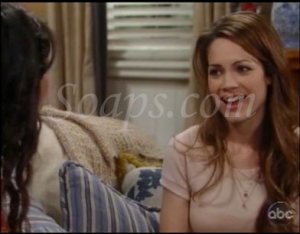