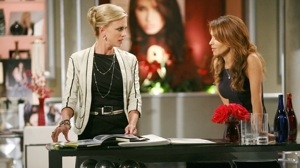 Check out Kate’s (Kelly Sullivan) new look in the photo to the right and watch “General Hospital” this week to find out what Kate does when Olivia (Lisa LoCicero) appeals to her cousin to reach out to Sonny (Maurice).

Kelly’s first appearance as Kate will be on September 12.

Per Soaps in Depth, the role of Kate Howard has been recast. It seems Kelly Sullivan will take over for Megan Ward as Sonny’s fashionista ex. Kelly has reportedly had small parts on “One Life to Live” and “As the World Turns,” as well as guest starred on “Law & Order: Criminal Intent.” Word is nuKate will begin airing in the fall.

What do you think of the news? Vote and comment below.

Read more casting news at Stuart Damon Back on General Hospital. Join us on Twitter @soapoperafan, and Facebook. Come tweet and Facebook with us about "General Hospital," all the other soap operas, "Glee," "Grey’s Anatomy" and "Vampire Diaries!"