A: Sam's dress is by Black Halo.

Carrie: Where did you get Josslyn's purple pajamas with a cow on the front she wore home from the hospital?

Diane, Jordana: Where can I get Abby's pink dress she wore to Michael's graduation on June 14 & 15?

A: Abby's dress is by Rebecca Taylor.

A: Brenda's top is by Joie.

Diane, Tara: Where can I find Kristina's dress from June 15?

A: Kristina's dress is by Frock by Tracy Reese.

Ami: Where can I find Sam's leggings and cream top she wore to the hospital the week of June 13?

A: Sam's top is by Armani Exchange. Her leggings are by So Low.

A: Kristina's purple tank is from Free People.

Debbie: Can you tell me where you got Robin's yellow short sleeved cardigan from September 4, 2009?

A: Robin's yellow cardigan is Marc by Marc Jacobs.

Bellamy: Who made Lulu's purple exercise top from June 14?

A: Lulu's workout top is by LuLu Lemon.

Michelle: Who made Lulu's top from June 22?

Kate: Who made the white with black piping dress Maxie wore on June 23?

A: Maxie's white dress with black piping is by Black Halo.

Cara: Where can I find the gold bangles Brenda has been wearing lately?

A: Brenda's gold bangles are from Cartier.

Sippi: Where did you find Maxie's gold shoes from June 16?

A: Maxie's gold shoes are by LAMB.

Q: Who made the flowered dress Kristina wore on June 10?

A: Kristina's flowered dress is by Trina Turk.

Q: Where can I find Alexis' name necklace she has been wearing in June?

A: Alexis' necklace is the actor's personal necklace.

Did you miss our last fashion article: Fashionista Questions Answered. (Past)? Join us on Twitter @soapoperafan, and Facebook. Come tweet and Facebook with us about "General Hospital," all the other soap operas, "Glee," "Grey’s Anatomy" and "Vampire Diaries!" 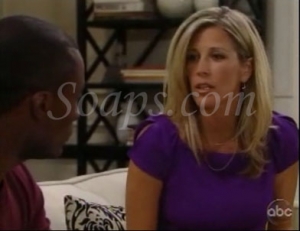 We’re back with the latest installment of our fashion scoop with “General Hospital’s” Head of Wardrobe, Mary Iannelli!

Nicole: Who makes the red skirt Maxie wore the week of June 6?

A: Maxie’s skirt is by H&M. It’s actually a dress but looked like 2 pieces.

Jamil: Where did you get Kristina’s summer dress from June 8?

A: Kristina’s summer dress is by Ecote.

Jennifer: Who designed the dress and black heels Sam wore on June 6 & 7?

A: Sam’s dress is by J. Lindberg. Her shoes are by Steve Madden.

Marilyn: Who made the dress Alexis wore on June 13?

A: Alexis dress is by Marc by Marc Jacobs.

Nancy, Kristal: Who designed Kristina’s white dress she wore in the Justice of the Peace’s office on June 14?

A: Kristina’s white dress is by BCBG.

A: Martha as Elizabeth carried a bag by LeBoyle.

Cindy, Dena, Kristal: Who made the purple dress Carly wore on June 2 – 7?

A: Carly’s purple dress is by Diane Von Furstenberg.

Christine, Ami: Where can I find the dress Sam wore to Kristina and Michael’s graduation party? 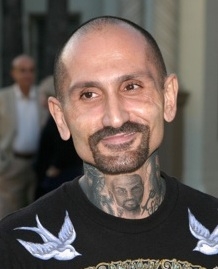 General Hospital Stars At Relay For Life Of Hollywood. (Updated.)