Through the years Luke has survived, and thrived!, a lot of drama but it was 2007 that perhaps challenged him the most. Not only did he have to finally come to terms with the fact that Laura, played impeccably by last year's Outstanding Supporting Actress winner Genie Francis (See Genie Here!), was never coming back to him, his health took a nose dive. Suddenly, the man who survived the likes of evil-doers such as Mikkos Cassadine and Frank Smith had to face-off with his own failing heart. Known for his love of the Blues over the years, 2007 came to an end with Luke (and Tony) singing on camera for the first time. What was his choice of song as he knocked on Heaven's door? Frank Sinatra's "My Way", of course. For fans who have watched Luke evolve from a lanky frizzy-haired oddball to today's debonair patriarch it was a joy to behold. The new year had Luke coming to terms with his own mortality and even giving in and allowing his aching heart to love again. Tracy Quartermaine Spencer (played sassily by Jane Elliot) remains the object of Luke's affections and Tony plays his newfound vulnerability spot on.

In addition to Lead Actor, General Hospital is nominated in the biggest category of all, Outstanding Drama Series. It have also been recognized (with nominations) in the areas of Art/Set Direction, Casting, Directing and Writing. To read the complete list of nominees (and see who GH is up against!) go here: This Year's Emmy Noms.

Soaps.com wishes General Hospital and Tony Geary luck on June 20th at the 35th Annual Daytime Emmy Awards. What's more, we'll be there on the red carpet to get all the scoop for our readers as soon as possible!

Daytime Emmy nominations were announced this morning live on “The View” and there is undoubtedly one excited actor from General Hospital, the man behind Luke Spencer of course – Tony Geary. Not only did he garner GH’s only performing nomination this year, but if he wins he’ll tie for the most Emmy wins for one single character! (OLTL’s
Erika Slezak has won six.)

Tony introduced the world to the untouchable Luke Spencer in 1978 and to this day there’s no character quite like the one he and GH have created. (From what we at Soaps.com understand through various interviews with fellow cast mates, Tony has a lot of freedom to put his own spin on his character’s dialogue and perhaps that is why Luke is so…well…”Luke”.)

GH Actor Wants our Help in Saving a Woman's Life 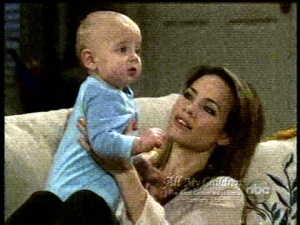