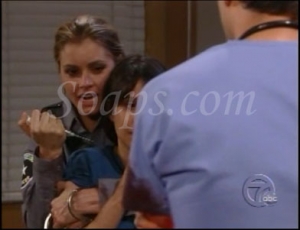 Jason's not onboard with Jackal P.I. (Soaps.com)

Last week, Lisa’s reign of terror ended, the truth about Aiden came out and we were treated to a much needed dose of humor. A few other things happened as well, so let’s get to it.

Ding dong! The witch is dead.
Okay, Lisa’s not dead, but she is in a coma. Sure, she could wake up at any time, but for now, I will enjoy a Lisa-free environment. It was a pretty lame exit in my opinion though. The whole “kangaroo court” was really boring with no real suspense and despite her stabbing herself with the syringe, which was the only interesting twist, Lisa just fell into a coma and was wheeled out. Done. After so many months of watching her terrorize Robin and Patrick, she really went out with a whimper. Not to mention, I was truly baffled over her not being handcuffed after Dante took her down. Did no one think she could wake up and run off or strike out again? It was pretty ridiculous. I also found it funny that everyone went back to business as usual after their ordeal. Robin gave Sam her pregnancy results like nothing just happened and Steve performed surgery. Really? Doesn’t anyone need some down time to collect themselves after being held hostage and almost killed?

The truth is out.
I was getting a little worried, so I was thrilled to see Rebecca Herbst return as Elizabeth in time to tell Lucky that Aiden was his son. Lucky took the news in stride, but Nikolas had a much different reaction to hearing he wasn’t in fact the boy’s father. After Elizabeth forgave Luke for killing Jake, Lucky forgave Elizabeth and Siobhan for keeping the truth about Aiden from him and Siobhan forgave Lucky for setting the fire that almost got her killed, it was refreshing to see someone have an angry reaction to upsetting news. I loved seeing the fire in Nikolas as he accused Elizabeth of making it up in order to save Lucky and ordered her to never speak of it again. It was so deliciously Cassadine of him. I’ve really missed that since they’ve been playing Nikolas for such a wimp lately. I’m disappointed he’ll be leaving this week and feel there is a lot more story for the brothers to mine in the aftermath of the paternity reveal. I’m hoping that new head writer Garin Wolf’s decree that “sometimes they come back” refers to him.

Comic relief.
Last Thursday's episode was so much fun. After all the angst, drama and threats in Port Charles lately, it was nice to lighten up a bit for an entire episode. From Jason's exasperation over the Jackal P.I. to Alexis and Sonny's argument over parenting to Ethan trying, but failing, to put one over on Edward, it was pure entertainment and a nice reminder of how well "General Hospital" does humor. What do you think? Vote in our General Hospital Poll: Good Times in Port Charles.

Random thoughts.
I was so happy to see Michael turn down Johnny's job offer for good. It never made sense that he would consider it and it'll be fun to watch him work in Edward's world.

Where were Brenda's bodyguards when Anthony approached her and Alec at Kelly's? Aren't they in place for that very reason? And how exactly did Sonny break into the Zacchara penthouse for that matter?

Why was Ronnie so bitter towards Dante for helping cover up Lucky setting the fire? First of all, Ronnie has no room to judge and secondly, Dante was trying to help a fellow cop, not his gangster father again.

I'm not sure how I feel about this bordello mess Lulu is getting herself involved in. Not to mention, Javier doesn't seem that scary. I was expecting a far more menacing looking character.