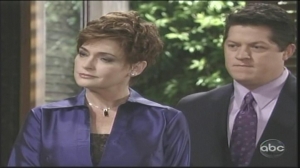 Lucky tries to torch the past (Soaps.com)

I’m just filling in for Lori this week. I promise that this exposure to my moaning is momentary and she’ll be back next time.

I’ll be upfront about this: I haven’t exactly been a dedicated viewer of “GH” over the last few months. I keep up with the plots, and I watch bits here and there, but actually sitting through an episode became difficult awhile back. That’s mostly because of Brenda and Sonny. They’re simply agonizing to me. I used to just take a drink whenever she would pull on her sleeves or he would furrow his brow, but even after imbibing a few bottles of whatever was on hand, they only became harder to take. Luckily, they weren’t around much this week.

Like Christmas and the heartburn that accompanies it, the annual hostage taking at General Hospital came this week. Lucky actually rolled his eyes as it started. There was a lack of urgency from everyone. No tension, no excitement. It was more like Lisa was forced to act a script at an audition before a bunch of bored talent judges. The whole thing was played for farce, right down to Spinelli falling from the ceiling in another failed attempt at heroism.

Unlike most people, who are, perhaps, saner than I am, I really enjoy Lisa. That’s why I find all of this so sad. She’s got more spunk in a half baked plot than Robin and Patrick have had in their whole relationship. All that union has managed to create is a child who looks bored when she has to interact with them and this meandering “Fatal Attraction” ripoff. Lisa charged Robin with being whiny, boring and narrow minded and Patrick with being an arrogant self-absorbed twit. I can’t argue with either of those charges. In the world of fiction, they should be punishable by death, preferably one more interesting than what Lisa had in mind. But while my poor Lisa started to see her role getting further flushed into the sewer, at least she got one of the best lines of the week…

Line of the week.

Lisa (to Anthony): You make me feel sane.

Max and Milo talking about where to dump Ethan’s body while standing beside him. Actually it was a pretty decent week all around for the bumbling brothers. I know they’ll never get real plots, but at least they could get more airtime. Getting Brenda’s goat by teaching her kid martial arts was also a nice touch. And I’m glad that Diane had the backbone to stand up to the little diva in spite of her caterwauling and refused to let Sonny get sucked into another story about fatherhood.

Meanwhile, a couple of the Corinthos kids had their graduation this week. Michael had another of his rage-ahol attacks when some foppish twit started moaning about Kiefer. Seeing all of those mortar hats flying through the air was one of the highlights, even if it petered into yet another after school special type discussion with Jason about his future. And then Stone Cold had yet more conversations with Sam about parenthood. Does this prospect thrill you? Vote in our General Hospital Poll: Should Sam Be Pregnant and let us know.

Also: It's always nice to see the Davis ladies together, even though they didn't give Molly much to say this time. And Michael and Abby are moving way too fast.

The emotional core of the week was all Lucky and Luke. They had another of their brutal discussions about life and Luke claimed that killing Jake finally liberated him from the poison of domesticity. It was good stuff as usual and Jonathan Jackson (Lucky) took home a well-deserved Emmy last night for this kind of thing. It just makes me wish it was complemented by something better than Lulu trying to give the Haunted Star a makeover and poor Dante wandering between everyone. I know he's not a good cop, in more ways than one, but I feel bad for the fact that he's been relegated to a kind of crossing guard for the town's population of flakes. His scene teasing Carly about Michael was cute though.

Former "Days of our Lives" star (she took over the role Kirsten Storms left) Martha Madison continued her stint as Liz. They did a good job with her hair. Actually, she hasn't been bad at all. Although I usually appreciate the jarring weirdness of having another actor step in – a pleasure you can really only get on a soap - that hasn't happened this time. The momentary recast certainly didn't get in the way of where all of this seems to be going. You can see the writing on the wall as the Liz and Lucky thing comes around for another hammering. Who has to die to liberate them from this? Siobhan's character has been gradually evaporating over the last few months. The writers must have stopped being interested in their romance. They've started writing her like she was an old bottle of wine he keeps in his fridge for when the bars are closed.