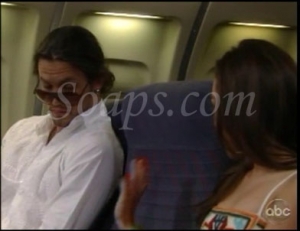 Is there hope for Luke? (Soaps.com)

Last week, Port Charles lightened up a little bit, but still remained a tad puzzling. We were also given a peek at the new head writer’s vision for the show, along with news of a lauded scriptwriter joining the team. It’s a hopeful time in Port Charles, so let’s get to it.

Big news.
Garin Wolf recently discussed his plans for the future of General Hospital in an interview with TV Guide. His declarations of balancing out the canvas, using the mob as just a backdrop, telling generational stories, using the Quartermaines more and even featuring Wyndemere (meaning Nikolas might not be leaving after all) was all very positive and what the fans have been wanting to hear. Hopefully he’ll live up to his word and we’ll see some big changes on the canvas soon. One of those changes will include soon-to-be former head writer of “One Life to Live” Ron Carlivati who is joining the writing team after “OLTL” goes off the air. While I don’t love all of his stories in Llanview, most of his stories are steeped in genuine emotion, humor and history. Just as long as there are no split personalities introduced in Port Charles, I’m good.

Heartbreak leads to humor.
Since we haven’t seen Maya in ages, I thought Ethan finding her in bed with another man was going to happen off screen. I was so happy it didn’t, because watching it play out definitely gave Ethan’s heartbreak more heft. Nathan Parsons had me close to tears as he was forced to say goodbye to his wife of convenience, who he was starting to have genuine feelings for. Kudos to the actor who proved he had the dramatic chops to pull that off. Ethan of course turned around and headed to the Dominican Republic in a hung over stupor while trying to get rid of Sonny Corinthos’ barely legal daughter, who crashed his divorce. His bad boy swagger intact, combined with Alexis and Sonny freaking out over the thought of Kristina running off to get married, provided us with some much needed comic relief in what seems to be a sea of grief and anguish in Port Charles these days.

Enablers.
While it was nice to see old friends finally reconnect on the pier on Friday, Robin and Brenda's scene was just awkward. Aside from the fact that they didn't show up until near the end of the episode, Brenda immediately started shrieking, fearing they were being shot at. Talk about a bizarrely off kilter scene. Of course, as Brenda wondered if she was a bad mother for keeping Alec in Sonny's orbit, her bestie Robin assured her she just needed time getting used to being a mob wife. Really, Robin? That coupled with Sam arguing for Jason staying in the mob and Carly only agreeing that Sonny and Jason's line of work is dangerous when it suits her, made me want to throw something at my TV. They are dangerous men who kill people. It cannot be rationalized. What is wrong with these seemingly smart women? Oh, right. They live in Port Charles.

Odd man out.
I was so sad for Spinelli when he was on the outside looking in at Maxie, Matt, Robin and Patrick at Jake's. The writers really need to give him a new love interest, some happiness and his own storyline.

Past the point of no return?
In his grief and remorse, Luke is making an extraordinary effort to push his family away, but will he push away his fans too? He killed Jake, refused to accept that his drinking played a part in it, skipped out on rehab (even though it was what Lucky, Luke's son and Jake's father, wanted) and now he's paying a hooker for sex, despite being married to Tracy, who he professes to love. I'm not sure I care what happens to him next. Do you? Vote in our General Hospital Poll: Can Luke Be Redeemed?

Seamless transition.
Martha Madison temporarily took over for Rebecca Herbst as Elizabeth last week and so far she's doing a good job. She looks enough like her, especially from behind, and can bring the tears, which is definitely needed in this storyline. I'm not emotionally connected enough to Elizabeth to be unsettled by the recast, but I wonder if it was necessary instead of just waiting for Rebecca Herbst to return from her illness. I guess as long as the original Elizabeth is back in time for the reveal that Lucky is Aiden's father it won't matter. If she's not and Martha Madison is the one to play out those scenes, we're gonna have some problems.

Leslie Charleson's Monica Back On...