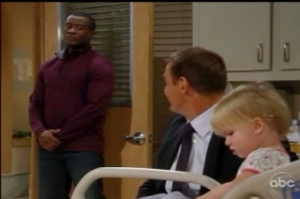 Carly and Jax have waged war over custody of Josslyn. Not content with just calling Sonny and Jason out for being a dangerous presence in his daughter’s life, Jax has now brought Shawn into it by digging up dirt on his past. Shawn didn’t take it too well and he punched Jax, but did he have it coming?

Vote below and don’t forget to check out the latest General Hospital Weekly Blog.