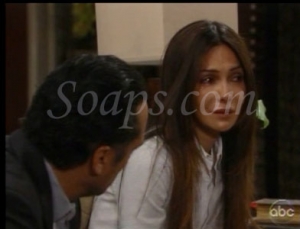 A dark past. (Soaps.com)

It was more of the same in Port Charles last week. Luckily all the angst was broken up a little bit with some David girl humor. It’s just too bad there wasn’t more of it to go around though. Let’s break it all down.

Secrets uncovered.
We started to learn more about Shawn, the glorified manny, last week. Namely, that he was involved in a friendly fire incident while serving as a marine. This week should shed more light on that situation and I’m looking forward to learning more because, aside from his attitude towards Jax, he’s an interesting character and has amazing presence. I’d love to see him in a romance, but I don’t think Carly should be it. He could be her Jason number two, but I don’t feel any romantic chemistry between them yet. Regardless of that issue, what do you think about Jax exposing Shawn’s past? Vote in our General Hospital Poll: Shawn Versus Jax.

Where’s the love?
Brenda and Sonny continued to argue about the dangers of his business and if she and Alec were safe in his world. Blah, blah, blah. I found it humorous that through sobs and tears, Brenda told Sonny she was only happy when she was with him. Wow. I’d hate to see her unhappy, which I think is the problem with their story. They haven’t been allowed to just enjoy being together, robbing the viewers of a satisfying reunion. They went from being separated, to getting married, to her being kidnapped, to them arguing over her child and his business. Add that to her being an emotional wreck all the time and it’s just no fun. I did agree with her outrage though when Sonny said she should leave the parenting of his kids to him. I understand it’s difficult when your new spouse offers input on kids you’ve been raising for over a decade, but they are married now and I don’t blame her for feeling shut out of such an important part of his life. Especially when he acts like such an ass. Of course, as is the standard these days, Brenda came around to seeing things Sonny’s way after hearing from emotionally scarred Michael and Kristina how great Sonny was as a father. I really wish she could stand her ground with him on something. Anything.

Lost soul.
Lulu is at her wits end trying to make things right for Luke, even though he skipped out on rehab. Luckily she’s got Dante, Tracy and Maxie looking out for her. However, I’d rather she went on that adventure with Dante instead of being yet another emotional wreck. Someone on the canvas needs to have some fun. Why not the once cute and charming Dante and Lulu?

Consequences.
Michael continued to alienate the people in his life by insisting he work for the mob. I still don't believe Michael would turn his back on his family by joining up with the Zaccharas. I was happy Jason expressed his disappointment in Michael, but made it clear he would always be there for him. On the other hand, if there was the threat of permanently losing Jason, it might make Michael think twice. Abby already broke up with him due to his stubborn attitude towards his future (although I don't think that will last), maybe the thought of losing the only other sane and stable influence in his life would force him to reconsider.

Growing up too fast.
Kristina continued to shock her friends and family with her new look. While I am enjoying everyone's comedic reactions, I don't really see much wrong with what she's wearing. She just looks overdressed for every occasion, not necessarily like a "hoochie mama," as Alexis hilariously put.

Curses.
I was really hoping that per the GH spoilers, Lisa was going to actually put a curse on Patrick. Yeah, she laid out her prediction that he would cheat on Robin again, but I wanted her to say the words, "I put a curse on you." I mean she's crazy enough these days to do that right? Why not go there? Alas, she didn't, but her words did affect Patrick, who ran out to buy his wife flowers and profess his love. I'd like to see them actually delve into his fears of Lisa's words coming true. An actual study of the dynamic between Robin, Patrick and Lisa would have been more interesting than Lisa stalking the Drakes for the last year.

That's it for me this time around. What did you think of last week's "General Hospital?" Feel free to share your thoughts below.