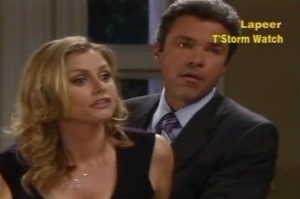 Last week, two big storylines came to a head, but they seem to be far from over. A few other things crept in there as well, so let’s get to it.

Facing the music.
Well, Lisa finally got busted. I liked that Patrick and Robin weren’t fooled by her this time and got the upper hand, but I had to laugh at how they recounted how they pieced everything together via flashbacks a la “Scooby Doo.” I expected someone to rip their face off revealing they were really someone else. As we know from our interview with Jason Thompson and Kimberly McCullough, even though Lisa was arrested, that was not the last the Drakes will see of her. It’s not that I want Lisa to be written off, but I would like her to focus her craziness on someone else for a while. Kudos to Johnny though for not helping her get out of jail and walking away in disgust when she tried to manipulate him by referencing Claudia. I hope it’s not the last we see of those two, because I think they could be a diabolically fun couple together.

Manipulation.
Speaking of Johnny, I’m not really sure what his agenda is with Michael. He seems to want to protect him from Anthony, but then he also wants him to work for him. Is he playing Michael or his father these days? As for Anthony, why would he visit the hit woman he’s being accused of hiring to kill Brandon? The interrogation room at the police station gets more traffic than Kelly’s or the Metro Court. I would think it would look a little incriminating on his part. But then again, he is a little off his rocker.

Zero days sober.
After feeling like he was turning into his father, Luke finally decided to enter rehab. However, once he got to the all-purpose Shadybrook, he seemingly bribed someone to let him out. Since it’s not court mandated, I would think Luke could leave rehab anytime he wanted though. Maybe I just interpreted that scene wrong, but either way it seems Luke does not stay in rehab long. I get that it’s sort of in character for him to run, but after all the angst and tears and soul searching, it’s kind of a let down that Luke won’t be going through with rehab. It’s also a slap in Lucky’s face since he feels Luke’s alcoholism contributed to Jake’s death. Who knows, maybe Luke is going off to sober up on his own. Or maybe Helena grabs him again.

Mother figure.
There have been many great performances and scenes throughout Luke's alcoholism storyline and we were treated to more last week via Lulu and Tracy. I love their scenes together because even though Tracy has never been warm and fuzzy, she has a soft spot for her stepdaughter, which is always evident. I think she likes Lulu better than her sons or granddaughter. She certainly treats her better anyway. And Lulu could use a mother figure in her life considering how lost she is. What do you think Lulu should do? Vote in our General Hospital Poll: Lulu's Next Move.

Not so secret.
I found it odd that Siobhan just assumed Maxie knew about Aiden and blurted out that Lucky was the boy's father. She took quite a risk with such a huge secret. I'm still not even sure why she's keeping it.

Playing with fire.
I enjoyed Maxie advising Kristina on her wardrobe in order to help her dress older. Having been there herself, Maxie knew she was trying to impress an older boy. I was happy to hear her give Kristina some advice based on her experience, but I wish Brenda would have done a little more of the same when Kristina came to her. I'm not sure why Kristina is going down this road again with her father though, seeing as how her pretend dalliance with Johnny ended up in a car bomb.

Another goodbye.
It seems Brenda is heading out of Port Charles as Vanessa Marcil Giovinazzo announced on Twitter that she was leaving General Hospital again. I'm not exactly torn up about this news considering Brenda's return has been less than satisfying. The fiery character we once knew has been turned into an insecure, whiny victim. I don’t how she'll be written out, but since Jax is leaving as well, I wonder if they'll leave together.