Compare the scenes of yesteryear to the video promos of Luke's upcoming intervention. Join us on Twitter @soapoperafan, and Facebook. Come tweet and Facebook with us about "General Hospital," all the other soap operas, "Glee," "Grey’s Anatomy" and "Vampire Diaries!"

TMZ reports that the children of “General Hospital” creators Frank and Doris Hursley have brought a lawsuit against ABC. Per the outlet, the Hursley’s daughters claim the network has failed to honor a deal struck years ago with their parents giving them 10% of syndication profits. The women are asking a judge to audit ABC’s books in order to recoup the full amount owed.

Watch the video below of a tribute to “General Hospital” hosted by Reba McEntire and highlighting an episode from 1964. 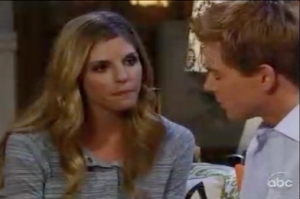