Proving himself.
As much as I dread watching more of this storyline play out, I understand Michael wants to prove himself to Jason and Sonny by joining the mob. I get the motivation, but I don't really feel like this version of Michael is still in that headspace. He's seen a lot and a lot has happened to him. We've watched him grow more sympathetic and introspective, so I don't really feel that's what this Michael would want to do anymore. Maybe the 10-year-old red-headed Michael or the angry, just out of a coma Michael, but not this almost adult who was raped in prison Michael. Maybe it's just me wanting a different storyline for him, but I also don't think he'd go to his father and surrogate father's rival gang for a job. No matter how nice Johnny is being to him. What do you want to see for the young lad? Vote in our General Hospital Poll: What Should Michael Do?

Missing in action.
I'm pretty disappointed that Jax has been reduced to the voice of reason on the show. It's pretty much all he's used for these days. He's just there to remind Brenda and Carly how dangerous Sonny and Jason's world is. Both women have had a front row seat to that show for decades and shouldn't need any reminders. But alas, Jax would have nothing else to do if Brenda and Carly could keep their kids out of the mob life. It's really too bad the dissolution of Jax and Carly's marriage is now basically just filler, as well. He's better than that and deserves a real storyline.

Aside from my not wanting to watch a baby storyline involving Jason and Sam, that's all I got this time around. What did you think of last week's "General Hospital?" Feel free to share your thoughts below. 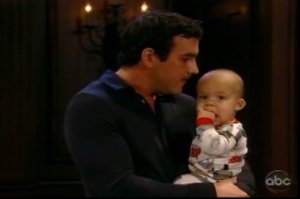 Despite a couple of new developments, it didn’t feel like anything really different happened last week. Of course, a few things did stick out at me, so let’s break it all down.

Dr. who?
It would seem Lisa’s plan for Terrell to seduce Robin is off the table. Aside from the fact that the Drakes have reunited, Terrell hasn’t been seen in weeks. Will we ever see him again? Pretty pointless to even bring him on in my opinion. I’m hoping this whole thing with Lisa drugging Kristina will be forgotten just as quickly. Maybe Anthony’s interest in her will pull her out of Patrick and Robin’s orbit for good. One can only hope.

The plot thickens.
After hearing Suzanne tell someone on the phone that, “Grandma will be home soon,” it led me to believe she has Brenda’s real son stashed away somewhere. It’s actually a pretty good plan to distract Brenda with a substitute son so she doesn’t go looking for the real thing. However, I would think at some point Brenda would get a DNA test done. It would certainly happen in the real world anyway. But even in the fictional Port Charles, why on Earth would Brenda trust Suzanne after all the lies she’s told her for the past three years? I also have to wonder if Theo is with the boy as well and they faked his murder for show. His off screen death still has me suspicious.

Paternity secret.
Elizabeth is still keeping the truth about Aiden from Lucky and Nikolas so she doesn’t drive a wedge between the reconnected brothers. It’s a pretty flimsy excuse, but as the truth remains hidden, we got a nice scene of Nikolas talking to his son about the joys of having a brother. That scene, along with the continued progress he’s making with Lucky, makes me wish they’d do a whole lot more with Prince Nikolas instead of writing him off the show. The other positive to the paternity mess last week was Matt’s reaction to Maxie trying to explain her predicament without giving him specifics. He was funny, yet supportive and insightful. It’s really time to send these two on a caper together. But, speaking of the DNA reveal, will they bring Helena back to wrap this story up? I’d rather see her than more of crazy, over the top Anthony Zacchara.