Falling into the wrong hands.
Maxie discovered the truth about Aiden's paternity and demanded that Elizabeth tell Nikolas and Lucky. It's certainly a role reversal for Elizabeth to want to hide the truth and Maxie to demand that she be honest. It's a nice change of pace, but I do wish they would delve into Maxie's guilt as her motivation more. I'd like to see more of Maxie's soul searching, with Matt by her side of course.

Not buying it.
Sam stopped by to offer Elizabeth her condolences regarding Jake and brought up the past in the process. I can ignore the unspoken absurdity of Jason and Elizabeth forgiving Sam for her staged attack on Liz and the kids years ago, but when Sam started to verbalize it, it was hard to swallow. In what universe would Elizabeth forgive Sam and then basically blame herself for everything that happened? I'd like to see Elizabeth get angry at some point, because I'm just not believing all the good will she's spreading around town in the wake of her son's death.

Kindred spirits?
As everyone warned Michael away from Johnny, Johnny assured Michael he wasn't offering him a job, but he wouldn't turn him away if he asked for one. I want to believe that Johnny has good intentions toward Michael, but with Anthony's presence growing stronger, I fear he's up to no good.

Best friends.
Why is Brenda acting like Suzanne is still her friend? They hung out with Lucian like Suzanne hadn't stolen her child and kept him away for three years. Kinda weird.

That's all I got this time around. What did you think about last week's "General Hospital?" Feel free to share your thoughts below. 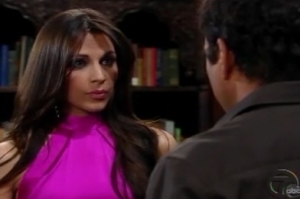 Credit: The voice of reason. (Soaps.com)

Last week it was announced that One Life to Live and All My Children have been cancelled. It’s hard to imagine, but that means “General Hospital” will be the last ABC soap left on the air. As a whole, that will only leave four soaps on the Daytime landscape. It’s upsetting news for sure and it leaves us a little insecure about the remaining soaps’ futures. We will have to savor what is left of Llanview and Pine Valley and support “General Hospital” and the other three soaps as much as we can. While this news eclipsed anything that happened onscreen last week, life as we know it in Port Charles went on, so let’s get to it.

Was that it?
Nikolas told Brook Lynn he couldn’t see her anymore because he had to be there for his family in the aftermath of Jake’s death. I admire his loyalty to the Spencers, but I thought it seemed a little rash. I imagine he could benefit from her support when he’s emotionally drained. Regardless, he turned her away and she moved out of Wyndemere. It’s been reported that Adrianna Leon is leaving the show, but was that her last airdate? The reps at ABC wouldn’t confirm, but would you like to see more of her? Tell us in our General Hospital Poll: Brook Lynn’s Goodbye.

Circling the drain.
As Luke continued his trek to rock bottom, a worried Tracy urged Lucky to reach out to his father. I appreciate her concern for Luke, but she really needs to back off her stepson. Luke killed Lucky’s kid possibly because he was drinking and he is showing no signs of stopping. So leave Lucky alone already. He needs to grieve, not coddle his father.