Reaching out.
Johnny has offered his help to Michael and Abby on more than one occasion. I would like to believe he just feels protective of Michael, as he did when he killed Claudia, but his phone conversation with his father Anthony makes me nervous. I'm not exactly sure what Johnny has planned and I'm not sure I like it.

Oh, Carly.
After attacking Brenda on her parenting skills, which, let's face it, she has no room to do, Carly went to Sam to suggest she give Jason a baby. Sam's child bearing issues aside, it's a pretty absurd solution to ease Jason's grief. I once tried to immediately replace a roommate's cat after I accidentally let it out and it ran away. It did not go over well. I can only imagine trying to replace one child with a brand new one would be an even bigger disaster. I hope Sam has the sense to turn Carly down. What do you think? Vote in our General Hospital Poll: A Baby For Jason and Sam?

Sticking around.
As reported in our General Hospital Comings & Goings, it seems Sean Blakemore has been put on contract as Shawn. This is good news in my book, as he is a good actor, has a ton of presence and is quite nice to look at. I just hope they have a good storyline in store for him and don't let him flounder like they did the once promising Mr. Craig, a.k.a. Jerry.

Other than it being nice to see Ethan finally resurface and Lucky and Nikolas' bonding scene being a nice treat, that's all I got this time around. What did you think about last week's "General Hospital?" Feel free to share your thoughts below. 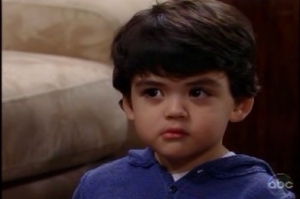 Last week on “General Hospital,” the men got emotional, Brenda got a surprise and Carly got creative. Other things happened as well, so let’s get to it.

Missing in action.
As the show continued to delve into Luke, Lucky and Jason’s feelings and heartbreak regarding Jake’s death, Elizabeth was nowhere to be seen. I’m having a hard time understanding why Elizabeth’s grief isn’t as important as the men’s. I wonder if we will actually get to see her truly grieve or if Aiden’s paternity will just take center stage. I fear the latter.

Surprise!
Since we didn’t see him die, I’m not entirely convinced Theo is dead. I sort of hope not because it’s a little unsatisfying that Brenda or Sonny didn’t get the chance to off him themselves. Regardless, Suzanne popped in with a little boy, claiming he was Brenda’s son. Lucian is adorable, but I’m a little skeptical regarding Suzanne’s claims. Brenda should be too. I’m with Sonny – she needs to get a DNA test. No surprise, Jason jumped right in and took over Lucian’s security detail, despite still grieving over his own child. Just once I’d like to see Jason not come to somebody’s rescue. It’d be an interesting change of pace for him not to care about anyone else and perhaps lash out a bit. Maybe take Luke’s lead and go on a bender. Anything, just something different for his character.