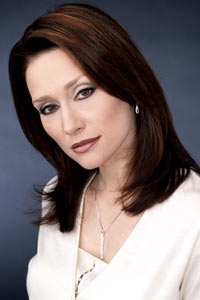 *Natalia Livingston will be around through May, albeit not in an earthly way.

*Jasper Jax will be played for three episodes the week of January 14 by Gideon Emery. (You might recognize Emery from Fox’s “24” or Passions.)
The reason? Ingo Rademacher is said to have asked for some time off due to a scheduling conflict. He’ll return to his role the week of January 21.

*Actor Gino Conforti comes to Port Charles on January 10 playing a character named Brother Franco. Conforti has done many films, TV shows and Broadway plays, including the original “Fiddler on the Roof”

*Brandan Barash (twisted Johnny Z.!) is now a contract player. And it’s a long-term agreement, we’re told. He was supposed to be killed off during November sweeps but has turned out to be a hit with the fans.

*Soaps.com has learned that Robin Christopher (Skye Quartermaine) has shot her last scenes in mid-December – making her last air date some time in mid-January. The actress and her husband have since moved their family to Pennsylvania.

*Soaps.com has just heard from Jason Gerhardt’s (Coop) manager, Anthony Barnao. Sadly, the powers that be decided not to pick up their option on Jason’s contract and he filmed his last scene on January 8. Barnao promises that there are many irons in the fire for Jason. No doubt Soaps.com will keep readers up to speed on his career. Good luck Jason, we will miss you!

*Rachel Ames (Audrey Hardy, Liz’s “Gram”) has retired after 43 years on GH. Enjoy your retirement Rachel – well deserved! An ABC spokeperson has said that the door will always been open for her to return.

*Emmy-winning Bruce Weitz has been cast as the maniacal mobster Anthony Zacchara. You might recognized him from Hill Street Blues (Sgt. Mick Belker), Judging Amy or Sisters. His recurring role starts on October 22.

*Jay Pickett starts airing on October 9 as PCPD Dective David Harper, a recurring role. You might recognize him from Port Charles where he played Frank Scanlon from 1997 - 2003.

*October 5th brings a new female to the GH mix, namely, Nadine. She is the sister of Night Shift's Jolene. The rumor is that Nadine will interact with people from the hospital. Nadine, a recurring role, will be played by Claire Coffee.

*Kelly Monaco has indeed signed a new GH contract! It is said to be flexible enough to allow her time to do other project. Congratulations Kelly (and all Sam fans!).

*Nazanin Boniadi, Leyla on Night Shift, is moving to the Day Shift. She joins the cast of GH under contract.

It's Opening Night for GH's Carolyn...