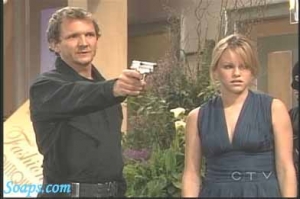 I just love it when I interview someone that I’ve not spoken with yet. To be honest, my newest conquest is even more exciting because he’s a he and quite a charming one at that. I’m referring to the oh-so worldly Sebastian Roche. And, if that name doesn’t ring a bell for you, try Jerry Jacks, James Craig, Mr. Brosnan or Mr. Moreau on for size! General Hospital has certainly given this actor enough characters to play wouldn’t you say? They’re all mysterious scoundrels, but when I found Mr. Roche on the other end of my phone all I heard was a really nice guy – hence the Pre-Emmy nom for Best Support Actor, which was what I called to interview him about. However, Sebastian was so laid back and humble that I could tell he didn’t want to talk much about the industry coup. He said, “…I’m fairly mellow about these kinds of these, but I mean, it’s nice to be recognized. I take it all with a pinch of salt. Awards shows can be political, you know – but since it came from my cast mates and people who work on the show that means a lot to me.”

I asked him of all the scenes that he played in ’07, which of them does he think put him in the Emmy race? He thought for a minute and then said, “A lot of the Metro Court scenes have the dramatic moments, but I actually love doing lighter things. I’ve had a lot of fun scenes with Alexis, Nikolas, Irina and Carly.” On that note, I had to stop and think for a minute because I’d completely forgotten about Jerry and Carly’s trip to South America to clear Jason’s name. For me, one word comes to mind when I think about Jerry with all of the people he shares scenes with – “banter.” I don’t know if it’s the writers’ dialogue or Sebastian’s playful delivery (it’s likely a combination of both) but it’s Jerry’s banter that makes any scene he’s in fun to watch.

I decided not to torture the poor guy with questions like “Who will be with you on the red carpet?” and “What will you wear?” (You’re welcome, Sebastian!) Since this was the first time we’d spoken, I had to ask about his accent. Turns out that he speaks three languages in addition to English: French, Italian and Spanish. “The languages of love,” he reminded me. On that note, I found myself repeatedly telling the guy that although most fans love to hate Jerry, I can’t help but love to love him. He let me off the hook by admitting that a lot of bad people are great charmers. Yes indeed. The fact that Scott Peterson has so many female pen pals just blows my mind, but I digress!

He told me that he and Ingo (Jax) get along great as friends and they remain hopeful that their characters will get to do more together in the future. And, when I told him that I know Alexis is a smart cookie but I hope she gives in and allows herself to fall for Jerry, Sebastian commented that he would love for Jerry to have a relationship. He added that he loves playing the "..cat and mouse game that a couple plays when they haven't consummated their feelings yet."

Sebastian was on the GH set and didn't have much time between scenes, so I didn't want to keep him long. I reminded him that when Julian Stone played Jerry years ago that he left Bobbie at the altar. Then I joked that it's odd that Jerry and Bobbie haven't crossed paths yet. "I dunno, maybe there's slight amnesia on his part," Sebastian dead panned. At that point I let him off the hook so he could put on his scoundrel face and go rip up a scene as Jerry. I told him that my contact list of GH actors was somewhat lacking in testosterone and he promised to fill that void for us with future interviews. I certainly intend to hold him to it. In fact, Soaps.com hopes that he'll get an Emmy nomination and then I'll ask him what our inquiring minds want to know about the big event. Thank you for your time Sebastian, it was really great talking with you.

Tyler Christopher's Off Hours Are On