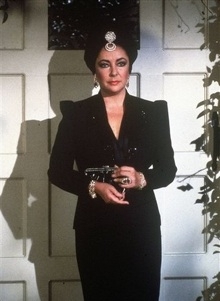 The passing of an icon.

Anthony Geary (Luke) also issued a statement regarding Elizabeth Taylor’s death: “Elizabeth was more than a great star, she was an amazing human being. Her world famous physical beauty paled in comparison to the beauty that radiated from her heart and soul. She had great humor, didn’t take herself too seriously, and had the most wonderful bawdy laugh. She was a fierce and loyal friend and tireless advocate. She dedicated herself to education, treatment and the search for a cure for HIV/AIDS long before it was fashionable to do so. Back in the dark days of ignorance and prejudice against people stricken with the disease, Elizabeth was at the forefront of the battle. Ever ready to give love, comfort, and dignity to those whose lives had been devastated and cut short, her generosity was nothing short of spectacular. It made her furious to hear anyone claim that people who had HIV/AIDS were somehow morally inferior or that the disease was some kind of punishment. I was fortunate enough to call her my friend and every moment I spent in her company was unforgettable. I loved her very much. The world is a little darker, a little colder, a little less beautiful without her.”

A rep for General Hospital issued the following statement regarding Elizabeth Taylor’s passing: “We were honored to work with Elizabeth Taylor on “General Hospital.” Her portrayal of Helena was a defining moment for the show and an extraordinary experience for everyone involved. She was a great talent, a gracious lady, and a rare presence. We are deeply saddened by her passing and send our deepest condolences to her family and friends.”

The Hollywood icon gained fame at the age of twelve for her performance in the 1944 film “National Velvet.” She later went on to win academy awards for “Butterfield 8” in 1960 and “Who’s Afraid of Virginia Woolf?” in 1966. She had many other memorable roles including Maggie in “Cat on a Hot Tin Roof,” Madam Conti in the TV mini-series “North and South” and of course Helena Cassadine on General Hospital in 1981. Elizabeth Taylor also visited Pine Valley on All My Children in 1984 as a board member at the Chateau and a maid at the Goal Post Restaurant.

While Elizabeth Taylor was a respected actress, her love life garnered just as much attention, if not more. She was married to hotel heir Conrad Hilton, Jr., actor Michael Wilding, producer Mike Todd, actor/singer Eddie Fisher, actor Richard Burton (twice), Senator John Warner and construction worker Larry Fortensky. Although they never married, Anthony Geary (Luke) recently admitted to having an affair with his former co-star that lasted a couple of years. Out of her many marriages, Taylor had four children.

Love and career aside, Taylor was also known for her charity work, most notably for AIDS research. Her benefit for friend Rock Hudson, who was dying of the disease, led to the American Foundation for AIDS Research. She also began the Elizabeth Taylor HIV/AIDS Foundation in 1991.

Trivia: Elizabeth and Eddie Fisher were the Brangelina of the 1950s. Feel free to read about Eddie Fisher’s passing.

Soaps.com’s condolences go out to Elizabeth Taylor’s friends and family.

Relive the beginning of Luke and Helena’s long relationship in the video clip below.