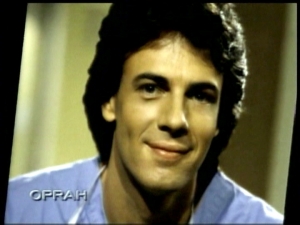 Rick has still got it! (Soaps.com)

Oprah was down right giddy when General Hospital’s own Rick Springfield took to her stage today in front of an audience of screaming women. He seemed pretty giddy too, in hindsight. Perfectly comfortable with the female adoration, Rick took his seat next to Oprah and opened up some pretty private moments for all to hear. Within the first five minutes, he told Oprah that all of the success in the world left him in a pretty low place at one point in his career (1985). His wife was about to have their first baby and he just stopped everything and stayed home to be a “house husband.” Five years and two sons later, he got back to work and never regretted the time spent at home. “…it was the most amazing thing I could have done because I have an incredibly close relationship with both my boys and a great relationship with my wife,” Rick said. He told the gushing ladies around him that his wife, Barbara, has been with him since before “Jessie’s Girl” hit the charts and knows him better than anyone. He even choked up when he told Oprah about his passion for his family and how it was born while moving around as a kid in a military family. And no family discussion for Mr. Springfield would be complete without mention his dogs. One of them, Ronnie, even made it to the cover of his album named “Working Class Dog.”

Oprah was very generous with her praise as she reminded viewers that Rick’s heartthrob status maybe have started on GH, but he also appeared on 80’s iconic television such as The Incredible Hulk, Battlestar Galactica and Wonder Woman. (Yes, we even got to see vintage photos of a very young Rick in character for these roles.) A very young Jackie Zemen’s pretty face (as Bobbie Spencer) made the cut, too, as we saw footage of Bobbie feeding Noah Drake a strawberry. Then, as if anyone needed reminding, Oprah said that Rick’s music has sold more than 19 million records and made the top 40 hits 18 times.

Before he joined his band to rock out, Oprah asked him about this person who was "Jessie's Girl." Rick laughed and admitted that she was the very hot girlfriend of a guy named Gary, but "…'Gary' just somehow didn't sing right," Rick joked. Oprah pushed for him to reveal the girl's name, but Rick said that he honestly doesn't remember it and maybe he never even knew it to start with. He said that he has long since lost touch with Gary so he couldn't even find out if he wanted to. With that said, it was time for him to let his inner teenager out and perform. Rather than write a description of the energetic connection between musician and his audience, it's better to let you, dear Soaps.com readers, see it for yourself! Here you go: Click this link to see Rick perform "Jessie's Girl" on Oprah!. Ahhh, wasn't that fun?

Oprah had two other 80's icons to introduce to her audience (William Shatner and Henry Winkler) to so sadly, Rick's time ended far too soon. He'd make an excellent headliner on Oprah, wouldn't you say?

Tyler Christopher's Off Hours Are On