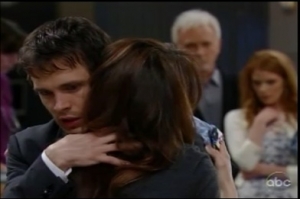 The main things to happen in Port Charles last week revolved around Jake getting hit by a car and Josslyn being diagnosed with cancer. I will discuss the outcome of Jake’s surgery in this week’s blog, so if you don’t want to know what happens to the little guy, you might want to read this after Monday’s episode. Before we get to the crash and cancer diagnosis though, a few other things happened, so let’s get to it.

The buildup.
Before Carly and Jax learned Josslyn had cancer, Carly tried to set her husband up to make it look like he stole the jewels Luke had in his possession. It was a pretty stupid subplot in my opinion. When Agent Bates entered the scene, he threatened to arrest both Jax and Luke for the crime, but let it go because he didn’t want to deal with the potential headache Alexis, Luke, Jax, Ethan and Carly posed for him. Um, sure. The only good thing about it was that Jax wasn’t fazed by Carly’s shenanigans. Carly should have known the threat of being arrested for something he didn’t do wouldn’t rattle this “former corporate raider with shady business tactics.”

As for Carly’s son, Michael decided it was more important to prove himself worthy of joining the mob, by overseeing an illegal shipment, than staying out of prison. One would think his experience with Carter would have set him on the straight and narrow for the rest of his life. Guess not.

Meanwhile, Johnny sent Robin and Lisa on a treasure hunt for the syringe. He told Lisa that it was really all about her letting go of Patrick. If he really wanted that to happen, why didn’t he just turn the syringe over to the cops or give it to Robin? And will the syringe really be that damning? I’m not sure how Robin will prove it was the same one she claims Lisa used to try and inject her IV with.

Across town, Lucky and Siobhan decided to take the plunge and get hitched in order to keep her in the country. The scenes of them debating it were kind of cute as Siobhan found the humor in Lucky wanting to date her after they got married. Luke even came around to be their witness, but of course their union was interrupted by news of Jake.

Jake and Josslyn.
Many of you already know, but if you don't and want to…Jake does not make it. This of course will enable him to donate his organs in order for Josslyn to survive. I really don't have a problem with soaps depicting the death of a child, because it does happen. It also gives us a story about real human emotion, instead of arcs about larger than life villains and biotoxins. If Friday's episode is any indication, there will be a lot more tears shed before all is said and done.

Even though I was tearing up in every scene, including Tracy and Luke's, I do take a few issues with the story. First of all, it's a total rip off of Maxie receiving BJ's heart from years ago. General Hospital just recreated the Clink, Boom storyline, why recycle another one so soon? I at least hope they let Maxie and Bobbie share some scenes together recalling their own history under the exact same circumstances. Secondly, it's too convenient and manipulative to have Jake die the same day Josslyn all of a sudden needs a kidney transplant. It would have been nice to become emotionally invested in her condition before Jake was conveniently hit by a car allowing him to save her life. Thirdly, I don’t believe the drivers on the road - Luke, Carly, Sam, Robin, Lisa, and Sonny & Brenda - could have hit a little boy and not realize it. And if they all become suspects, it's a bit of a stretch to believe they all drove past Elizabeth's house, in the suburbs, at the same time. Lastly, Jake has too much potential storyline down the road to kill him off. He is the secret son of a mobster, who happens to be a Quartermaine, but was raised by a Spencer. It seems to me they could do a lot with that, but we'll see how this storyline plays out.

That's all I got this time around. What did you think? Share your thoughts below and vote in our General Hospital Poll: Jake's Hit And Run Accident.