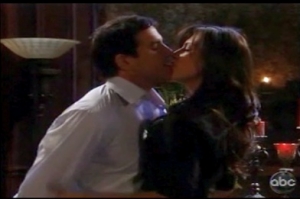 A little levity in the afternoon. (Soaps.com)

Last week, Brenda was finally rescued, Elizabeth took a couple of hits and I was left wanting more from a few of Port Charles’ most charming couples. Other things happened as well, so let’s break it all down.

Coming to a close.
I’m so happy Brenda was rescued from the Balkan. Not because I was worried she would actually die, but because I am so over this storyline. I’m also glad she will finally get out of that dress. I found it funny that Sonny insisted to his son he and Brenda had no more secrets between them when Dante suggested Brenda’s baby was still alive, which is why the Balkan was after her. How does Sonny know? They didn’t have five minutes alone after he learned in front of everyone that Brenda was even pregnant and supposedly miscarried. At this point, I’m not sure if Brenda is telling the truth, but I definitely suspect Suzanne has the child hidden somewhere. My only question in this whole mess now is – is Jules dead? Unless I missed something, he came to Sonny with a knife in his back and we never saw him again. Did Sonny get him help, leave him to his own devices at the Metro Court, or throw him in the harbor? I wonder if we’ll ever find out.

No morning after.
There’s a good chance we’ll never know if Jules is dead or alive, considering Nikolas and Brook finally had sex on Tuesday last week and we’ve yet to see them resurface. Maybe they are still getting it on all over Wyndemere. That would actually be funny if the next time we see them it’s days later and they’re still recovering from their marathon sex session.

Double whammy.
Elizabeth got bad news from both the men in her life last week when Nikolas told her she needed to get used to the idea of him with Brook and then Lucky told her he was probably going to marry Siobhan. Who will she turn to for help now? Hopefully no one, which is how they should have been writing her all along – as an independent single mother, instead of someone who all of a sudden needs the prince she rejected to make her life easier. Of course, if you've seen this week's video promo, you know Elizabeth is in for a much harder road in the weeks to come.

Moving on.
I was happy to see Johnny and Olivia run into each other and catch up. Even though they've moved on, it's nice when the show remembers two people were together. Especially a couple as hot as Jolivia. I also enjoyed Steve getting jealous at seeing his new lady friend talking with her ex. Steve and Olivia have their own brand of charm, so they really need something more to do than just have a meal together once in awhile.

More please.
Another couple I'd like to see more of is Matt and Maxie. They were totally cute, charming and hot together this week. I loved their fun, flirtatious banter as they broke into Johnny's place and then discussed their romantic pasts at her apartment. They need to embark on a fun mystery or madcap caper together. Robin and Patrick should join them as well, considering their own break in at Johnny's was the most I've enjoyed them in months. Enough with the melodrama. Give these couples something fun and lighthearted to do.

Other than not liking Kristina's renewed crush on Ethan, adoring Michael and Abby's burgeoning relationship, and loving Jason's confused reaction to watching a romantic movie with Sam, that's all I got this week. What did you think? Feel free to share your thoughts below and vote in our General Hospital Poll: The Next Step For Sonny And Brenda.

Last Call for WandaVision Speculation: Who Is Running the (Sitcom) Show?