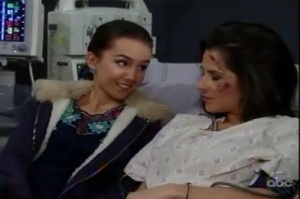 Even though Brenda was kidnapped right after her wedding and Sam’s condition was up in the air for a bit, I didn’t feel like anything was really at stake. We know Sonny will eventually get Brenda back and we knew Sam would survive and that her hearing would return, so watching it all play out left me feeling pretty uninspired. However, other things happened as well, so let’s break it all down.

The highs.
While it was a pretty ho-hum week for me, there were a few things I enjoyed. I continue to like Shawn, especially with the hints of the decent person he probably is despite the fact that he was working for the Balkan. I truly hope they give us more insight into him. Jason’s reaction to Sam in peril was also pretty good. I genuinely felt like he loved her and that he would have been devastated had she not survived. He even stuck around until she recovered instead of heading out to help Sonny find Brenda, which was pretty admirable. A newly shorn Nikolas and Brook admitted they had feelings for each other, which was sweet. I just hope Nik takes Lucky’s suggestion and gets out of his own way so he can be happy with her. Jax and Carly finally talked about their marriage ending. I wish there was more angst injected in their conversations, but at least they acknowledged their marriage was over and found some sort of common ground regarding Sonny and Brenda. The mystery surrounding Suzanne’s involvement with Brenda and her baby continued to pique my interest. That’s about the only thing we don’t really know right now so I’m enjoying the sole bit of intrigue there is on the show. The Davis women rallying together and the moment between Tracy and Luke after he took care of Edward were also high points.

The lows.
While I enjoyed the above, there was of course some things I wasn't too keen on. Michael began expressing his interest in joining the mob again, which I thought was a dead issue. Sadly it's not. I do not want to see him join the family business, so hopefully, Jason and Dante can talk him out of it. Even though I liked the Davis women racing to Sam's side, I'm really tired of how precocious Molly is. Of course she knew sign language and had to teach Jason and Sam how to communicate their love to each other when Sam couldn't hear for two episodes. It's really creepy how invested she is in their romance. Then there's Lisa and Terrell's plot to break up Robin and Patrick, which feels so last year that I forget it's still a current story arc. Is anyone invested in this, or really believe that Terrell will lure Robin away from Patrick? I'm not and I don't. While I'm enjoying Suzanne and her secrets, I would be fine with the Balkan leaving town. What started out fun and sinister has turned drawn out and repetitive.

Looking forward.
Although uninspiring, last week did tease us with a few good things to come: learning more about Shawn, Brenda's escape, the truth about Brenda's baby, as well as Suzanne's involvement, and Elizabeth finally figuring out who Aiden's father is. I just hope these stories play out with a little more suspense and feeling of real consequence than last week's plots did. What are you most looking forward to? Tell us in our General Hospital Poll: Anticipated Stories.

That's all I got this time around. What did you think about last week's General Hospital? Were you as uninspired as I was, or did you enjoy it? Feel free to express your opinions below.