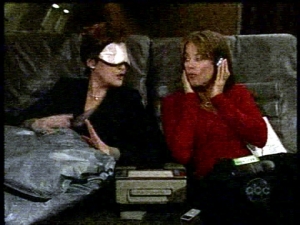 Diane and Alexis’s recent foray into the wilderness in pursuit of “Litigator of the Year” was so much fun that I had to call Carolyn Hennesy (Diane) for a chat. Carolyn laughed as I complimented her work in the chick action adventure genre. “I called it Lucy & Ethel meet Thelma & Louise and hit daytime,” she told me.

Then I asked her how she and Nancy Lee Grahn (Alexis) were able to keep a straight face during the shoot. “We didn’t…a lot. The scenes took a long time to get through because they were choreographed and we used stunt people. So, we got to giggle it out during rehearsals,” she said. Carolyn went on to say that hearing the crew laugh while actually shooting made it difficult for her not to laugh. She pointed out that the blossoming friendship between Diane and Alexis has been good for Nancy Lee Grahn. Her character, Alexis, is finally getting to delve into areas like irony and humor, which she rarely gets to work with. Carolyn shared that NLG told her, “I’m having the best time with you.” She went on to say that Diane and Alexis are two smart women who aren’t really attached to anyone are finding tremendous comfort and camaraderie with one another.

I asked her if any of the hilarious one-liners from the gal pal adventure were hers and found at that they were! Remember when Diane and Alexis were coming out of the woods and saw the cabin light in the distance? In the scene, they were pontificating about various types of people who might live there and came upon the idea of a mute brother. Diane quips, "It's always better when they don't talk."

Another perk of the storyline was that Carolyn's husband, Donald Agnelli, was cast as one of the bikers in the bar. She told me that "...he's 6'5", has no hair and can look rather nasty" so it made perfect sense when the casting department chose him. She said she had to cool it when he was working and not play "kissy face" with him in front of the authentic stunt guys who were cast to do the bar scenes. Although she maintained her professional distance, she said it was great working with him. (For those of you who might not know which biker was Donald, he was the guy that Alexis danced with and Diane stole the gun from. Read the update here: Diane and Alexis hit the road!)

Thank you Carolyn for sharing some behind-the-scenes scoops with Soaps.com. We can always count on you to respond to our inquiring minds, can't we? As always, you are a HOOT!

The Many Loves of GH's Robin Scorpio