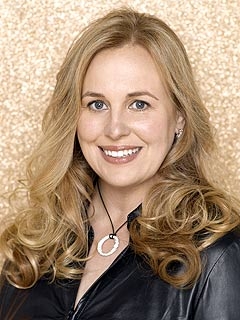 Former General Hospital star Genie Francis (ex-Laura) has teamed up with her husband Jonathan Frakes for a new project. He will be directing her in episode 9 of Current TV’s “Bar Karma.”

“Bar Karma” is the first community-developed television series. It offers viewers the chance to control show content. The two storylines it is looking for viewers to give their feedback on are about a woman who either has multiple personalities, or is a twin. To vote on what you would like to see Genie deal with, submit your pitches on The Woman with Multiple Personalities or The Twin until Monday February 21.

For more information on the series, please visit Bar Karma through social networking sites including Facebook and Twitter. “Bar Karma” airs on Friday nights at 10.00 PM EST. Look for Genie’s episode to air in April.

General Hospital Saturday Teaser Poll: Who Objects At The Wedding?