The Many Loves of GH’s Robin Scorpio 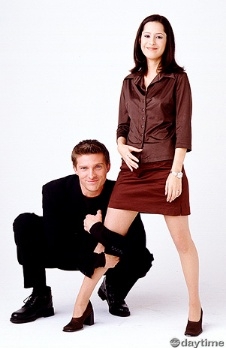 With so much focus this last year on Jason, Sonny and Carly’s love life, it’s high time that cupid points his arrow at someone else, wouldn’t you say? How about the lovely (and very deserving!) Dr. Robin Scorpio? Well, that’s exactly what SOAPnet has in mind this Sunday, February 10 at 10 AM (EST). Robin Unwrapped is a three-hour marathon that will give General Hospital fans a pleasant reminder of sweet Robin’s romantic journey through the years.

Stone Cates, Jason Morgan and yes, the dashing Dr. Patrick Drake have each occupied a very special place in Robin’s heart and viewers will get to see the landmark episodes that showcase why. For example, Kimberly McCullough’s second Emmy was awarded to her based on her portrayal of Robin’s heartache during the illness and death of her first love (Stone Cates) from AIDS. Included in Robin Unwrapped is the episode (which would be better described as an “epic”sode) from 1995 in which Robin lies in bed with Stone as he slips away. Also airing will be a show from 1996 when Robin allows herself to leave her grief behind and follow her heart into the arms of childhood friend Jason Quartermaine. And last but not least – Soaps.com readers all likely remember when Robin and Patrick exchanged their first “I love you” and will be treated to a replay of that classic eppy from 2006. (To read this recap, go here: Vintage Episode of Robin & Patrick.)

Robin Unwrapped will be hosted by non other than Kimberly McCullough and she will be joined by Jason Thompson (Patrick Drake) between episodes to read love letters from their fans. As Robin and Patrick venture into their first foray into parenthood (whether Patrick knows it or not!), what better to focus on than the notion of true love?