Bridezilla.
When Brenda first came to Port Charles as a teen she was a bit of a brat, but I thought she grew into a genuine and sensitive person over the years. I don't quite remember her being so rude and oblivious to other people as an adult. I feel like a broken record when it comes to her, but each week I become more and more irritated when all Brenda can think of is her wedding. After being accused, I loved Carly telling Jason she would have ripped up Brenda's dress, but she didn’t. Of course she would. We all know that, but she's got more important things to worry about - like her son getting raped. My money's on Suzanne. Who do you think it is? Vote in our General Hospital Poll: Wedding Saboteur.

Playing games.
I know I should side with Robin regarding the state of her marriage, but I'm totally on Patrick's side here. Yes, he cheated on her, which is inexcusable, however, I did not like how she told Terrell something along the lines of her not feeling like a married woman from one day to the next. She was just so cavalier about it that it didn't ring true to the character for me. Not to mention, the two of them have made strides towards reconciliation and Patrick has been groveling for months. He deserves better than having to watch her drink with Terrell at Jake's while sitting at the next table alone. I was happy that Terrell pointed out to Robin that Patrick seems to be making a sincere effort to repair their marriage though. Hopefully this was a precursor to him backing off his plan to bed Robin in hopes of sleeping with Lisa, which is absurd all on its own.

Putting Theo in his place.
I loved Alexis giving Theo what for when he made all those sexist remarks regarding her being a working mother, but the scene seemed just thrown in there. She had a great speech and I love anytime a strong woman stands up for herself, but I'm not sure what the point of it was. Speaking of Alexis, does anyone else think they either need to go somewhere with her and Mac or else drop the token holiday setup between them all together?

Aside from enjoying the cuteness of Lulu surprising Dante and Jason being romantic with Sam on Valentine's Day, that's all I got this time around. What did you think of last week's "General Hospital?" Feel free to share your thoughts below. 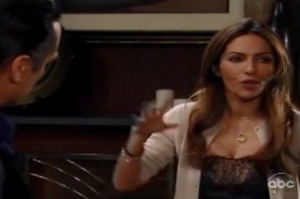 General Hospital Rundown for the week of February 7 – February 11:

The plots thickened last week as Sonny and Brenda’s wedding day approached, Robin and Terrell got closer and Lucky decided to trust Siobhan. Let’s break it all down.

A father’s love.
As annoyed I can get with Sonny’s self-absorption, he does love his kids. When he talked with Michael about his rape, Sonny was everything a loving, supportive parent should be. I was glad that when Sonny saw Brenda immediately afterwards, he didn’t betray his son’s confidence by telling her what happened. Even though they are getting married and can barely see anything beyond each other, that’s a secret for Michael to tell.

Over and done?
Speaking of Michael, I’m a little disappointed we didn’t see any of his therapy session. Also, I thought we’d get some of Abby this week as well. I think they need to address her issues about Brandon’s attack. I know it was designed to facilitate Michael’s confession, but Abby might have a few feelings on being beaten and almost raped herself. As was touched on in a prior blog, maybe nurse Elizabeth could stop by for a heart to heart. But back to Michael, I’m glad Dante talked his brother down from seeking revenge on Franco. I just really hope they don’t just drop this plot point and instead continue to let Michael deal with what happened to him.

Always right.
Jason warned Lucky not to go to Ireland with Siobhan because he can’t trust her. I feel like Siobhan is trustworthy at this point, but when Jason has a bad feeling about something he is usually right about it. Could that mean Siobhan is still up to no good, or could Jason actually be wrong this time?

The third wheel.
Poor Elizabeth. They’ve really given her nothing to do these days except throw herself at Nikolas. I loved the look on her face when Nikolas offered to get her home from Jake’s, but by offering to get her a cab, not by taking her home himself. Not quite what she was hoping for. However, I’m a little confused. Does Elizabeth want Nikolas because she’s still interested in him or does she just want the security that comes from being with a wealthy prince?

General Hospital Saturday Teaser Poll: Who Is After Carly?