Double standard.
It was really hard to side with Carly when she confronted Jax about Brenda. She doesn't exactly take Jax into consideration when it comes to Sonny and Jason, yet, she expects Jax to stay away from his ex, just because she doesn't like it. So, now I guess their marriage is over? Since we never got any follow up scenes and they haven't been playing their marriage at all lately onscreen, the impact of Carly kicking Jax out was lost on me. It's too bad that Jax wasn't involved in Michael's confession. He was a big part of Sonny's trial, which led to Michael being sent off to prison, so why isn't he around to feel the pain and guilt as well? His talk with Morgan after he and Carly fought was a nice touch though, considering he basically helped raise the boy and they are so close.

More insight.
Not only did Michael finally reveal some truths last week, but Brenda shed some light on her baby secret: She passed out from a fever while pregnant and discovered her baby had died when she woke up. We're still not sure who the father is, but since Suzanne was there when this went down, I have to wonder if somehow she stole the baby and it's alive somewhere out in the world. Or have I just been exposed to too many crazy soap opera plots? It's not like it hasn't happened before. Erica's unabortion on All My Children comes to mind. What do you think? Vote in our The Truth About Suzanne Poll.

Odds and ends.
As I said earlier, everything else pretty much paled in comparison to Michael's storyline, but Nikolas getting jealous over his business associate's interest in Brook was cute and Tracy was funny when she got arrested for Luke's smuggling. On the flip side, I am bored with Lucky and Siobhan trying to outwit the Balkan and I wish they would give Patrick and Robin a better road-to-reconciliation storyline. Unusualpsycho thinks Lisa encouraging Terrell to seduce Robin is just a retread of past storylines and instead suggests, "This would be better if they would make Terrell friends with Patrick and realize he doesn't want to be part of Lisa's plan before he accomplishes her goal." What do you think?

That's it for me this week. Feel free to share your thoughts about last week's "General Hospital" below. 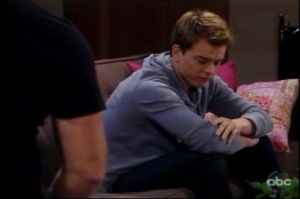 Credit: What really happened to the baby? (Soaps.com)

General Hospital Rundown for the week of January 31 – February 4:

Last week there was really only one storyline worth noting – Michael’s – but of course a few other things happened, mostly surrounding his storyline, that caught my attention, so let’s break it all down.

The payoff.
After months of speculation, Michael finally admitted what most viewers suspected: Carter raped him in prison. The quick flashback scenes of Carter were pretty chilling, so I’m really glad they didn’t show more. Of course, this all came out after Michael saved Abby from her ex-boyfriend Brandon, who almost did the same thing to her. From Abby’s realistic screams to Michael’s haunted look to Jason and Carly’s immediate acceptance to Dante’s guilt, the performances were powerful and heartbreaking. Tears were definitely shed. However, I could have done without all the other storylines that were showcased on Monday, when Michael first confessed. Nothing that happened that day held a candle to what was occurring onscreen with Michael and it would have had even more impact if that was the only story that played out.

Regarding the scenes, Cowboys Fan posted in the daily recap comments, “Lord, when I think about the fuss I made when they recasted Michael with Chad Duell, I’m so ashamed. This young man can act his butt off. He finally confessed what that lowlife did to him in prison. He broke my heart today. If he doesn’t get a Daytime Emmy, they are nuts.” It seems most of you agreed. jl4ever also made a good point about this storyline in a comment under my interview with former General Hospital writer Karen Harris: “Elizabeth as a rape survivor should have been involved in Michael’s storyline from the beginning instead of a new character that has absolutely no ties to the soap.” I don’t necessarily agree about the last point, because I like Abby (who I assume jl4ever is referring to) with Michael, but I do agree it would be a nice use of history, and a veteran character, to have Elizabeth interact with Michael in regards to what they’ve both been through. 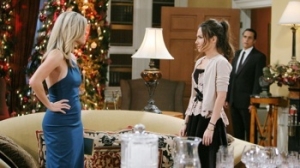