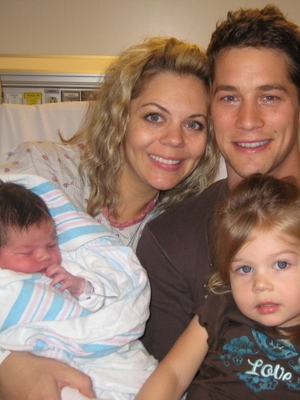 It may be with heavy heart that General Hospital fans mourn the death (by hanging, no less!) of mysterious Cooper Barrett, but it is my great pleasure to share my recent conversation with his Coop’s talented portrayer, Jason Gerhardt. The first thing I want to tell Soaps.com readers is Jason scheduled our phone call around the nap time of his not one, but two children! Yes, his daughter Madison is now the proud big sister of baby Hudson Lee Gerhardt who was born on December 7th, 2007. Jason and his wife, Chalae, are happily busy as they nurture their little family (which includes three dogs!).

Yet, as most of us know by know, the powers that be at GH decided in early December not to pick up their option on Jason’s contract. Jason shared his thoughts on leaving his first contract role. “From an acting standpoint, GH has been so good for me,” he told me. He explained that learned from watching the other actors perform and even picked their brains when the opportunity presented itself. I told Jason that it seems as if the writers kind of dropped the ball on Coop’s potential. He thought for a minute and then said, “You know, to be honest… I think they did and it’s showing. From what I hear, not everyone’s happy with the storyline.” On that note, I asked him if he knows weather Coop committed suicide and/or if he is the killer. Jason admits that he does know whether (or not!) Coop is the Text Message Killer, but the show wants it to remain open-ended for now. Then we laughed when I asked him how much poor Maxie can take. Jason smirked, “Ya know, Kirsten Storms said the same thing!”

Jason says that he plans to stay in touch with a lot of his friends from the show, including Becky Herbst and her husband Michael Saucedo, Greg Vaughan, Maurice Benard to name just a few. If rumors of him joining another soap cast prove to be correct, he may soon add some new soap actors' names to his list of friends in the business. But for now we'll have to read between Jason's lines. When I asked about some of the interviewing he's doing, Jason said that he is looking at several projects but, "…soaps are about all that are moving forward right now." (Because of the WGA strike, which you can read about here: Writers' Strike 101.)

No matter how you look at it, Jason Gerhardt feels as if he's a rich man. He says that he's happily pursuing the work that he loves and it happens to be a business that affords him quality time to be at home with his family. He admitted that they are a little nervous with him being without a job at the moment, but he and his wife are faithful that it will all turn out for the best. "The good Lord always provides for us," Jason told me.

I decided not to monopolize his time while his babies were sleeping because I remember all too well how precious that quiet time can be! Before wishing him luck and promising that Soaps.com will follow his career, I reminded him of something funny that came from our first interview (Past Jason Gerhardt Interview). At the time I had congratulated him on his shiny-new four-year contract and Jason mentioned something about the writers always having a few "outs." In fact, I believe his exact words were that the people in Port Charles never know when they are going to catch a stray bullet. So, I reminded him of that, we chuckled and agreed that in Coop's case, Kevlar doesn't help much unless he would've worn in around his neck!

Thank you Jason for making the time to let your fans at Soaps.com know that you are doing great. And congratulations, again, on your new little boy.

It's Opening Night for GH's Carolyn...