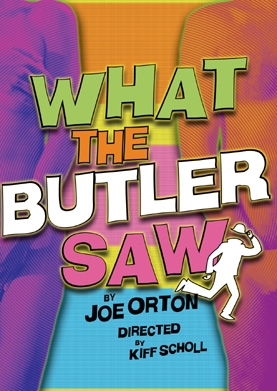 When I interviewed Carolyn Hennesy this week about her hilarious work on what we laughingly called “Lucy & Ethel meet Thelma & Louise and hit daytime,” I learned about some big doings that are happening tonight! She’s appearing in a hilarious British satire play called “What the Butler Saw” by infamously dark comedy playwright Joe Orton. What’s more, she’s appearing four nights a week for six weeks!

Carolyn excitedly told me that the production is very funny. I believe the words she used were, "…there are literally lunatics running an asylum!" I was told that the audience will be treated to cross-gender dressing, straight jackets and people running around naked (although she assured me that she was not one of them!). The farcical play deals with social attitudes towards sexuality in the '60's and is a delicious combination of dry humor and steamy contents. Carolyn is shedding her litigious Diane Miller character in favor of a scheming psychiatrist's wife by the name of Mrs. Prentice.

"What the Butler Saw" is at Los Angeles' Sacred Fools Theater (660 N. Heliotrope, between Normandie and Vermont) and runs through March 1. Tickets are just $20 and can be purchased at Sacred Fools Website. What
General Hospital fan in the Southern California area can miss a play that the LA Times has described as "Brash" and "…inventively stylish fun!"? In fact, the Sacred Fools website posts a warning for the show and it reads, "Be Advised: This play contains nudity, sexual shenanigans, dishonesty, and bad things happening to good people…" which pretty much sounds like
GH, right?

"Break a gam" dear Carolyn! But don't get too burned out to play Diane at her usual break-neck speed. However, after getting to know these past few months, I highly doubt that you ever run out of steam!