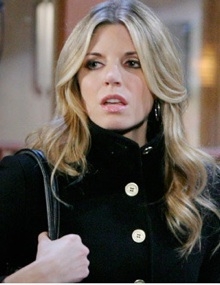 She currently plays Abby, the stripper with a heart of gold, on General Hospital, but on February 14, she’ll appear on “Castle” as Callie Langston. In the episode, Castle and Beckett must prove whether or not Castle’s old friend is guilty of murder.

A friend to Daytime, “Castle” is home to cast regulars Nathan Fillion (ex-Joey, One Life To Live), Seamus Dever (ex-Ian Devlin, General Hospital) and Ruben Santiago-Hudson (ex-Bill, “Another World”) and has also seen soap veterans Melody Thomas Scott (Nikki, The Young and the Restless), Rick Hearst (Whip, The Bold and the Beautiful), Eden Riegel (Heather, The Young and the Restless) and A. Martinez (ex-Ray, One Life to Live) as guest stars. “Castle” airs Monday nights on ABC at 10.00 PM EST.

We invite you to join Soaps.com on Twitter @soapoperafan and "like" Soaps.com on Facebook to dish on General Hospital, all the other soap operas, Glee, Grey’s Anatomy and Vampire Diaries!