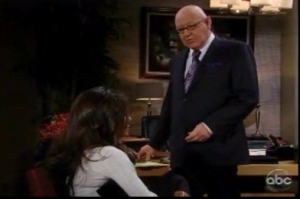 Not taking it too well. (Soaps.com)

General Hospital Rundown For The Week of January 17 – 21:

Last week gave us a casting shocker and pretty much just more build up of ongoing storylines. Let’s get to it and break it all down…

Shocker of the week.
In a week that was filled with major casting shakeups on just about every soap opera, General Hospital joined in on the fun when it was announced that “storyline dictates” Rebecca Herbst will be leaving the role of Elizabeth Webber this spring. I am sorry for the actress who is losing her job, but Elizabeth has been so far on the backburner, unless you are a diehard fan, her absence won’t be noticed much. There’s no word on what the storyline will be leading to her exit, but considering the secret of Aiden’s true paternity is still lingering, it could revolve around that issue. And just what about the kids? As I see it, the only way they would stick around is if Elizabeth is killed off or sent back to the loony bin. But with the Balkan skulking around town, could she become a casualty? Or maybe due to her recent money woes, she’ll just get a high paying job out of town. There’s a lot to ponder. While I have to admit I’m no fan of Elizabeth’s, I recognize history is important and beloved core characters help keep viewers coming back, so her being written out is a little perplexing.

Delusional.
Oh, Brenda. You told Theo you broke up with Aleksander because he was a criminal, yet you’re marrying Sonny, the mob kingpin of Port Charles. Do you really think he’s a coffee importer/restaurant owner, who just never has any customers? Sonny also pulled a gun on you after you startled him in bed. Of course, you dismissed it and even told him it was understandable. You bet Brenda. Keep telling yourself marrying Sonny is a wise decision and that he’s just misunderstood. Then there’s your dealings with Lulu. Why on earth did you think pleading Dante’s case to his scorned ex-girlfriend was a good idea? Lulu broke up with him because he lied about his relationship with you! The more I hear from you, the more I actually side with Theo, whose head was about to explode after talking to you about his son’s death. Of course you didn’t know Aleksander was Theo’s son, so I’ll cut you a little bit of slack on that one. But your self-absorption was so overwhelming, it was hard not to hope Theo gets the tiniest bit of justice he’s so hungry for.

Issues.
While Sonny dealt with Mike's off-screen gambling habits, Molly came to him for information on bipolar disorder. She questioned him under the guise of getting info for a school report, but he saw through it and realized she feared she might have the same problem. In the absence of her father, she and Sonny have built up a sweet relationship that I hope we continue to see flourish. If she does in fact have bipolar disorder, I can only imagine the wonderful ensuing scenes between the two, as he helps her cope.

Non-romantic pairings.
Aside from Sonny and Molly, we saw other great platonic relationships that need more attention. It was a treat to witness Brenda and Robin discussing wedding plans and the hot new doctor Terrell. They need to be more involved in each other's lives, as do siblings Patrick and Matt, who were equally fun to watch as Matt tried to counsel his jealous brother over the above mentioned hot doc. They all could use a little more support in their lives right now and the humor conveyed helps to lighten up the seriousness of their situations. I also enjoyed Maxie bluntly dolling out advice to Lulu while they toiled away at Crimson for a boss who is never there. Girlfriends and siblings are a fact of life that we can all relate to and appreciate, which makes scenes between them all the more enjoyable. Who's your favorite non-couple couple? Vote in our General Hospital Poll: Favorite Duos.

Proof.
Carly was thrilled when Diane gave her the authentic proof about Dante and Brenda's baby she's been after. However, she declared she will wait to drop the bomb on Sonny and Brenda's wedding day, just as the minister asks if anyone has just cause to stop the nuptials. This soap staple usually isn't so planned out, which makes it a tad too contrived. And who really believes Carly will be able to sit on this powder keg for another month?

That's all I got this time around. What did you think of last week's GH? Feel free to share your own opinions below.