GH Actors. Where Are They Now? (Past) 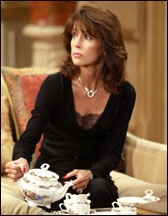 As much as General Hospital fans look forward to what’s to come, we also love to look back. Here’s a look at some of the actors lives who have departed from the sets of Port Charles:

*With so much talk in 2007 about the father of Elizabeth Spencer’s offspring, let’s take a peek at what’s going on in the life of Chad Brannon, the actor who played the late great Zander Smith (Cameron’s biological father). He’s been a very busy guy; for starters, he and his wife Carly had a baby boy named Hudson on December 18. A hearty congratulations from your friends at Soaps.com! On the work front, Chad’s vocal chords have served him well in that he’s been doing a lot of voice-over work and is up for a pretty interesting gig, the voice of SOAPnet! He also recently signed with a new agent and has high hopes for on-camera work as well.

*Ever since whack job Colleen McHenry (Spencer’s nanny) left Port Charles, her portrayer, Amanda Tepe, has been a very busy lady. She was recently spotted on two episodes of The Disney Channel’s “Cory in the House” as a White House tour guide. Since leaving GH earlier this year, she’s also been on acclaimed prime time shows such as “Dexter”, “Studio 60 on the Sunset Strip” and “Entourage”. What’s next for her? A feature film called “Jelly”.

*Remember Allegra Montenegro? Now think back…a couple years ago Sam (Kelly Monaco) had a look-alike named Alicia. Allegra was the girl’s mother who made Sam learn how to ballroom dance. Got it now? Anyway, the actor’s name is Meg Bennett (but some may refer to her these days as MRS. Robert Guza Jr.!). In addition to marrying the Exec. Producer and Head Writer of our beloved GH, Meg recently served as co-writer of Night Shift! Now that the show has completed it’s first season, she is working on a humorous memoir titled “You Used To Be Wonderful”, which refers to the comments she gets when fans recognize her from her various characters on Search for Tomorrow, Santa Barbara and The Young and the Restless (where she played Victor Newman’s first wife Julia).

*After playing the lovely Gabriela "Gabi" Garza on GH spinoff, "Port Charles", between 2000-2002, Ion Overman has been busy! She was on a February 2007 episode of "What about Brian" playing a character named Joanna. She has also been on "CSI: Crime Scene Investigation", "Without a Trace" and "CSI: Miami". That's not all! Ion was on Showtime's hit, "The L Word" from 2004-2005 and was in 2006's feature film called Phat Girls.

*When General Hospital's little Emily Bowen was left motherless, Monica Quartermaine adopted her and the world came to know who Amber Tamblyn was! We saw Amber (and Emily) evolve into a lovely teen, and then Amber left the show in 2001 to launch her career outside of soaps. And what a career is has proved to be! She appeared in TV's "Buffy the Vampire Slayer", "Boston Public" and ultimately landed her own show, "Joan of Arcadia". On the big screen, Amber starred as Tibby in "The Sisterhood of the Traveling Pants" and is working on the sequel which comes out in 2008. She's also an author now, her book of poems, Free Stallion, was published by Simon & Schuster in 2005. She continues to win accolades for her film work and perhaps the most telling of all was given by Roger Ebert, who said, "Amber Tamblyn now wears the crown for all young actresses in her generation."

*Stephen Kay (ex-Reginald, the Quartermaine butler) silently slipped out of Port Charles and made a name for himself as a director. He has many credits to his title, including a few eppys of "Friday Night Lights" and his new film; "Six Bullets from Now" stars Tim Roth and starts production in New York in fall of '07.

*Lynn Herring (ex-Lucy Coe) is a character who is sorely missed by the older GH fan base! It's hard to believe that she left GH ten years ago (and was on spin-off, "Port Charles", until it was canceled in 2003). Since then, we hear precious little about one of our favorite actresses. We do know that she and her husband, Wayne Northrop, and their two sons own and run a working cattle ranch just north of Los Angeles. As a family, the Northrops are involved in environmental causes, as well as support the Special Olympics. Still, a cameo or two couldn't hurt, could it???

*Jonathan Jackson (ex-Lucky #1) introduced the world to Luke and Laura's first offspring in 1993 and left the show in 1999. He's done many movies since then, including "A Little Thing Called Murder" in 2006, "Dirty Dancing: Havana Nights" in 2004, and "Tuck Everlasting" in (2002). He recently returned from Romania where he filmed a big budget fantasy film called "The Dark is Rising" (the release date isn't known yet). He also plays the guitar and sings in a band (with his brother!) called Enation. He married the lovely Lisa Vultaggio (who played Hannah Scott on GH!) in 2003 and they had a daughter in 2005.

LIVE CHAT with Carolyn Hennesy on...