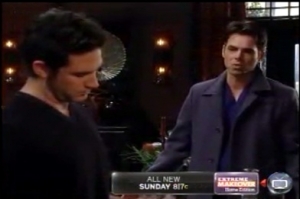 More to the story? (Soaps.com)

General Hospital Rundown For The Week of January 10 – 14:

Last week moved a few stories forward while also answering a few questions, but those answers just led to more questions for me. I also found myself quite puzzled by Johnny’s behavior in more than one instance, so let’s break it all down.

Afterthought.
I have a hard time believing Johnny doesn’t care more about Olivia being in the hospital after the bus crash. I was glad to see he briefly stopped by to check on her, but the Johnny who was in love with her would have sat by her side and talked to her after she woke up. I’m fine with him moving on to other storylines, and like him interacting with Lisa, but a small scene of him expressing his concern to the woman he claimed to love so much would have gone a long way.

Not quite clear.
So Siobhan is working for the Balkan because he is holding her sister captive. It’s good to know she isn’t just blindly helping the evildoer, but I still have a few questions: Why did the Balkan need Siobhan in the first place? Did he kidnap her sister after Siobhan met Lucky or before? Is the sister the same one who Lucky talked to on the phone? Regardless of my confusion, I was sort of hoping for a more exciting explanation for why Siobhan was helping the Balkan with his nefarious plans.

A new wrinkle.
Lisa’s plot to cause problems for Robin and Patrick is going pretty well thanks to the addition of her old pal Terrell from Texas. His instant chumminess with Robin hasn’t gone unnoticed by Patrick, who gets more annoyed by the day. I’m not unopposed to the new addition to the hospital staff, but I can’t say I understand why Terrell would uproot his life and pursue a woman in order to ruin her marriage, all in the hopes of sleeping with Lisa again. That’s basically why he’s going along with the plan, right? Seems a bit weak and unbelievable to me. But why should that make sense to me when I still can’t reconcile Johnny’s behavior? He’s never been malicious to undeserving people before, so why is he essentially helping Lisa break up Patrick and Robin? On a side note, kudos to Patrick for figuring out Johnny and Lisa’s true connection. Keeping digging Drake, Jr. Keep digging.

Innocent bystanders.
Michael just continues to endear himself to me more every week. I loved him standing up to his mother in regards to Abby and I just wanted to hug him after he wrecked himself by watching her strip at the club. Obviously her job, Carly and their age difference won't be their only problems as the mysterious Brandon has entered the picture. Bad things to come I'm sure, but first, Michael needs to graduate so it stops be so weird that she's dating a high schooler. On a side note, I'm not sure if there's more to Abby's arrest for prostitution or not, but when did Johnny buy a strip club? Moreover, why is it important?

Honesty.
While I had a hard time imagining the stuffy, reserved Prince Nikolas clubbing all night long, his scenes with Brook were pretty sweet this week. Too bad we don't get to see more of them together. I liked that she point blank told Nikolas she was at Lucky's because she was worried Liz was after his money. No more lies for this former manipulator. Although, I felt it was a bit hypocritical considering she is taking money from him to be his escort.

Enough.
I really am not enjoying anything about Brenda and Sonny's reunion. Brenda is portrayed as such a weak character, not to mention selfish, right along with her fiancé. I really wouldn't mind if the two of them went to hide out in Italy or his not so secretive island for a few months until the Balkan threat was over. Aside from their obliviousness to the rest of the world, I can't imagine why anyone thinks Dante being Sonny's, a.k.a. the Godfather of Port Charles, best man is a good idea. Dante is a cop who was once put on a task force formed to take him down. A conflict of interest if there ever was one.

Aside from the adorableness of Ethan and Maya admitting they just might have feelings for each other, that's all I got this time around. What did you think of last week's GH? Feel free to share your own opinion below and vote in our General Hospital Poll: Thoughts On Johnny Zacchara.