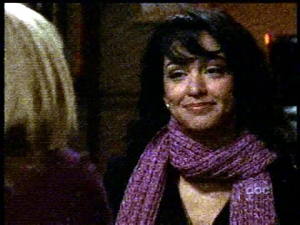 Will Nazanin take one of these home on Feb. 14?

Updated on February 18, 2008 Nazanin was nice enough to fill Soaps.com in on her experience at last week’s NAACP Image Awards. She tells Soaps.com:

“The Image Awards were so much fun… It was such an honor to be in the company of such legends as Stevie Wonder, Denzel Washington and Janet Jackson. I am a human rights activist myself, so I was thrilled to receive a nomination by such a
wonderful organization as the NAACP. I hope we can inspire the younger generation to “get up and be counted” which was the whole message of the event in this election year. I love that the night wasn’t just about who wore what, but rather who has made a difference in diversifying the entertainment industry. It is so refreshing to see actors of various cultural backgrounds representing different cross sections of our society. It’s an honor to stand among them.”

The last time Soaps.com scored an interview with Nazanin, I let you guys do the talking (Message Board Questions for Naz!). This time, it’s my turn. Last week the NAACP announced their nominees for the highly coveted Image Award (NAACP Spirit Award Noms Announced ) and we were thrilled to see that General Hospital‘s own “Leyla Mir” made the cut. Right away I contacted her publicist and viola! – Nazanin and I spoke via phone as she was driving down the 405 freeway toward home after shooting. So here you go, hot off the press (okay, so it’s my laptop instead of a press, but I just love the retro imagery that goes along with the term “hot off the press.”)

Julie Clark Robinson: Congratulations on your NAACP Image Award Nomination! Describe for us the scenario in which you found out about the nomination?
Nazanin Boniadi: I was shocked and delighted at the same time. I came out for lunch with Kent King and Minae Noji and I saw a (congratulatory) email on my blackberry. As Kent and Minae will tell you, I froze…then shrieked and then I got a little teary-eyed.

JCR: You were born in Iran, but raised in England – which explains your lovely accent! How do you think American television represents minorities compared to Great Britain?
NB: I just came back from London actually. British TV is finally starting to incorporate more minorities into their programming but the USA is a lot more diversified. There are over a million Iranian-Americans here and it is very nice to represent them.

JCR: Can you tell me why you think that your work as Leyla was recognized this year?
NB: I am the first Iranian character in daytime network TV who is portrayed by an Iranian-born actor. To be honest, I hoping that (the nomination) was because of my work, too, and not based solely on my ethnicity. But even so, when you’re able to break through and open doors, it speaks volumes.

JCR: Will you be attending the awards ceremony at the Shine Auditorium in LA? It airs live on February 14 from 8 - 10 (EST), what a glamorous way to spend Valentine's Day, eh? (If you go) is there someone special who will be accompanying you?
NB: Yes and my mom will be attending with me.

JCR: Do you have any information as to whether there might be a problem airing the awards due to the writers' strike?
NB: I heard that the NAACP just got a waiver from the WGA to go forward and air the Image Awards. I guess the bigger stars like Angelina Jolie, Will Smith and Denzel Washington are thrilled because they didn't get to go to the Golden Globes.

JCR: We wish you all the best Naz! Would you mind checking back in with us after the winner is announced to share some of your award-night experiences with Soaps.com?
NB: Absolutely, please!

By the time Nazanin reached her driveway, we were finished with our interview. It was really nice to hear that beautiful accent, what's more, her thoughtful comments coming through the phone. Thank you, Nazanin for taking the time to let your fans at Soaps.com hear from you during this exciting time. We wish you all the luck in the world.