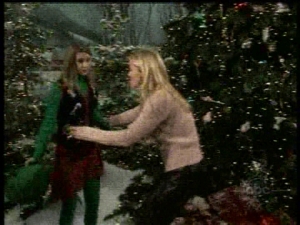 JCR: The title of your CD is “On the Fifth Floor.” What is that about?

RS: This CD is a collection of music written for TV, though some of the songs I decided not to sell so that I could release them to fans under my own record company, I Miss You Records. “Carry Me Home” – track 2 was placed in an indie flick, and “Not Going Anywhere” was written by JJ Farris & myself, who also writes for Fifth Floor, though most of the songs were produced or co-written with Bob Hartry. “I Will Give” is a love song I actually really adore & wanted to make it available to the public like the three little “Falling In Love” tunes on itunes. I’ve written about 70 songs for ABC, but I never know what will happen to them.

JCR: You've said that this CD release is a long-time coming because it was a big deal to get licensing rights reverted to you so that you could do so. Do what? Release it? Can you briefly explain that to us?

RS: Simply put, I licensed back five songs I wrote, owned by ABC, to release on this album. They still own the rights to the songs, but I'm able to sell them to the public on CD. Initially, Fifth Floor Music, a division of ABC, started buying my music for their Soaps. I don't think at that time any of us had an idea what would happen with the songs exactly, and though it has wound up a being little complicated, I think it's more a pleasant surprise.

JCR: Are you working on any music for GH at the moment? Care to share what your musical direction is - without giving away the storyline, of course!

RS: I'm working on a few things, though I cannot tell...! Actually, I've been in the studio on another personal project right now I hope to release soon (something of a different side of me), and creating time to play out more around LA, as well as working on some tunes for prime-time. It's a funny little time right now in TV land with the writers strike, but there are so many other avenues for music & I'm intrigued by all of them! I consider life a dashing adventure you can create...if it's there, you may as well go after it!

I love that, I've always thought that life is a dashing adventure as well. If you want to order this amazing collection of music, go Rie's site (Rie Sinclair's Official Site) and listen to some of the music, as well as order the CD. It's only $10.99 plus shipping and handling. Thank you Rie for reaching out to Soaps.com and sharing your unique insights into what goes into making some of the music behind our favorite soap!