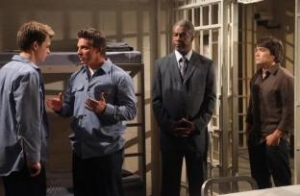 A look back at Port Charles.

The revolving door to Port Chuck didn’t get much of a break in 2010 with the likes of Dr. Lisa Niles, Franco, Brook Lynn, Maya Ward, Skye Quartermaine, Claire Walsh, Siobhan, Jerry Jacks and the still-lovely Brenda Barrett showing up. There were a few notable departures too, with the demise of Keiffer Bauer topping the list in my opinion. If you’re not sure how you feel about the plot twists and turns from 2010, maybe my take on them will refresh your memory.

Love triangle: Nikolas/Elizabeth/Lucky.
Yuck, yuck, yuck. The character of Elizabeth was eroded considerably by her inability to fight her temptation for the love-of-her-life’s brother! Granted, we saw some human frailty in her when she tried to pass her love child with Jason off as Lucky’s a few years ago, but you’d have thought the girl would’ve learned her lesson, right? If I were Rebecca Herbst, I’d not be pleased.

Cheater: Patrick Drake with Lisa Niles.
When Lisa first breezed into town, I skeeved a little every time she brought up the good ‘ol days with Mr. Robin Scorpio and now I know why. She had a plan and for a while there it looked as if it was working. I don’t doubt for a minute that Robin and Patrick will find their way back together and it might even be enjoyable to watch. What would be even better to witness is a new storyline that lets Dr. Lisa continue her villainess ways paired up with the likes of Johnny. (On a side note, I’m done with Olivia oozing her lust for Johnny. In fact, I think I could enjoy a nice farewell party with buckets of pasta and Chianti as she heads back to Benson Hurst.)

Bad guy meets his maker: Keiffer Bauer.
I have nothing but praise for this poignant storyline. It brought out so many layers in characters who were merely in the periphery. Who would’ve thought that a strong woman like Alexis would have a daughter who allowed physical abuse at the hands of a beau? Who could’ve predicted that Sonny would bare himself in therapy in order to help his daughter gain some much-needed self esteem? And finally, Kristina herself – Lexi Ainsworth played this story with just the right balance of vulnerability, denial and finally strength. The fact that Ethan bore the brunt of the blame for an uncomfortably long period of time made this story even more unnerving.

What goes on behind closed bars: Michael’s incarceration.
Claudia’s death back in 2009 carried over in a big way into the lives of several key players in 2010. While I wasn’t thrilled when Dante came forward with the truth about Michael’s part in the killing, he did redeem himself in my eyes as a loving and protective big brother. Just when I was getting used to Michael not being a red-headed tween…just when I was starting to buy into Drew Garrett as Carly’s beloved firstborn, TPTB swapped him for Chad Duell at the precise moment when we were supposed to be ripped up that such a sweet young guy was going off to Pentonville. To Duell’s credit, it didn’t take long to be sickened on Michael’s behalf when Carter did his damage. I couldn’t have predicted that Jason would willingly get himself sent to prison to protect Michael; that was sheer genius. What we have today is a haunted Michael, but I’m looking forward to watching him overcome in 2011.

Mommy Dearest? Carly’s ongoing rampage.
I’m so done with Carly and her mama bear act. She finally has a little girl with her beloved Jax; can’t she just simmer down for a while and be happy for a change? The fact that she tried to destroy cousin Lulu’s happiness didn’t ring true for me because they have always been more like much-needed sisters for one another. I don’t know why Jason, Sam, Brenda, Sonny, Jax and pretty much everyone in her path puts up with her.

Brokenhearted: Maxie dumps Spinelli.
As unlikely as it was to think that these two would live out a happily-ever-after scenario, it still hurt to see their romance end. I’ve enjoyed seeing Spinelli throw himself into meeting “The Devine One’s” every need and seeing Maxie squirm over his dedication to someone other than her. I don’t have feelings one way or the other for Maxie and Matt, but will remain open-minded to the possibilities.

A return to the wild side: Lucky goes back to his adventurous roots.
Seeing Lucky get crushed by Elizabeth and Nikolas didn’t affect me as much as I thought it would, but it did shine a light on the amazing chemistry between Jonathan Jackson and Tony Geary in case we forgot. When Lucky bellied up to the Haunted Star bar to drown his pain and Luke allowed it, I totally got it. Only a character like Luke would have done that and I couldn’t blame him for it. My admiration for the character of Lucky (and Jonathan Jackson) continued when he took the assignment in Ireland and ultimately fell for Siobhan. Love it, love it, love it.

Wedding bells finally rang: Luke and Tracy get it right.
I’m such a sucker for Luke. Whether he’s melting over his “Angel” Laura, doing a song ‘n dance routine at Pearly Gates or groveling at the heels of Edward Quartermaine’s only daughter, I will always be a fan. I’m glad that he jumped through Tracy’s many hoops in order to bring them together once and for all. When she stepped out on those stairs and realized that he had indeed shown up for their wedding, I think I actually felt her sense of relief. Her vulnerability rarely shows, but when it does at the hands of Luke I’m a goner.

The return of a favorite: Brenda’s back.
Was I glad to see her return? Sure I was. I’d forgotten about the way she always wears really long sleeves and cardigans even to black-tie affairs. I’d forgotten that when she speaks she barely puts forth enough effort to push out her words completely and how quickly the mood changes when she bursts out in laughter. I do love her love for Sonny and his for her. So, I’ll go into 2011 with interest to see how they fare even though I remain a skeptic. Why? He’s still a career criminal, what about her career and oh yea, there’s that pesky little matter of the child she bore.

Now it’s your turn! Do you agree with me or want to set me straight on a few things? In any case, it’s never boring in Port Charles and none of us are going anywhere, right? Happy New Year to all of my fellow General Hospital fans.