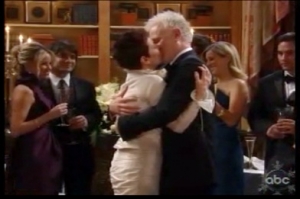 General Hospital Rundown For The Week of December 20 – 24:

I hope everyone had a wonderful holiday weekend! The residents of Port Charles seemed to fair okay over the shortened week, well, except for Jerry who was shot and fell into the river. His body wasn’t found, so it’s safe to assume he’ll turn up alive at some point down the road. Aside from that bit of business, most of last week revolved around Luke and Tracy’s wedding, which provided us with some good old fashioned soap opera. Let’s break it all down…

Making it legal.
After much doubt, threats from Edward and signing the prenup, Luke and Tracy finally tied the knot. Although, I’m not sure if Luke actually used his real name on the prenup or if he was kidding when he told Tracy he used a fake name. Either way, they are officially Mr. and Mrs. Spencer. Despite the strangeness of the wedding being held in the foyer at the mansion and no mention of Bobbie or Monica, I felt it was well done. Luke’s scenes with his kids encouraging him to go through with it, Brook yelling at her grandmother to get out of her own way and Luke tossing the getaway car key to Alice all made for great entertainment. The best part though was the teary look on Tracy’s face when she saw that Luke actually showed up to marry her. A close second was Edward actually expressing his happiness for his daughter. They were all great scenes and a nice reminder that soaps can still be engaging when they’re just about basic human interaction, with a little humor mixed in.

The wedding guests.
Other things happened at the wedding as well, like Spinelli arriving to inform Carly Dante signed over full custody of a baby to Brenda. She of course assumed the baby was Dante’s and will probably take great joy in using this information to her advantage. I’m genuinely interested to find out what the deal with this mysterious baby is, but I don’t think it’s Dante’s – just my guess. What do you think? Vote in our General Hospital Poll: The Baby’s Paternity.

Another event to happen at the nuptials was Sonny proposing to Brenda in Lila's rose garden. It felt a little sudden since they just got back together. They have grown and changed in various ways since they were last together and probably still need to adjust to each other's new quirks and outlooks on life. Not to mention, she's keeping a whopper of a secret, so they should probably take some time to get to know each other again. But, it's a soap and Sonny looked amazing in his tux, so how could she possibly say no? I know Brenda didn't actually give him an answer yet, but her smile pretty much said it all. However, Carly's ammunition is sure to put a damper on their happiness.

Keeping secrets.
After Jerry was "terminated" by the Balkan, a.k.a. Theo, Siobhan was ordered to call Lucky down to the pier to indirectly let him know Jerry was somewhere floating in the river. Of course this led everyone to assume Jerry was the Balkan and possibly dead, but we know better than that. Jax seems to as well. Siobhan gave a believable performance and then showed up to Luke's wedding as Lucky's date. I found it curious that after Lucky learned Siobhan had been lying to him about talking to her sister all this time, he didn't even bring it up. I also have to wonder what else the Balkan has in store for Siobhan and why he was so protective of her with Jerry.

Christmas in Port Charles.
Aside from the wedding, the holidays were celebrated in a few other places throughout Port Charles. Robin invited Patrick to come home so they could celebrate Christmas as a family with Emma. This was sweet, but you know Lisa's mysterious phone call at the hospital will eventually cause the Drakes more problems. Over at Crimson, Matt wouldn't let Maxie get rid of him. He was really sweet when he told her he was willing to risk just being a memory later if it meant he could be with her now. Sigh. They really need to flesh out this relationship more. Then, at the penthouse, Jason, Sam, Molly and Michael decorated Sam's Charlie Brown tree. This led Jason to bring Michael to visit Edward at the mansion, where Jason actually called him Grandfather. The look on Edward's face was priceless. Too bad Jason's mother wasn't there as well, but I guess you can't have everything.