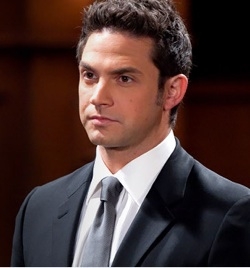 “I think what he’s doing is par for Johnny’s course.”

When Soaps.com talked with Brandon Barash about the 2011 Soap Cruise, we took the opportunity to ask about his alter ego Johnny Zacchara, who just recently broke up with Olivia Falconeri (Lisa LoCicero) and began blackmailing Lisa Niles (Brianna Brown).

Soaps.com: How do you feel about Johnny and Olivia breaking up?

Brandon Barash: I’m fine with it. I feel like the relationship had run its course and there really wasn’t much more for them to do the way that they had been written. And then, just the reality is, he’s a younger guy, who doesn’t really know if he wants a family and she’s an older woman who may want a family, who may want to settle down and Johnny knows he can’t give that to her. It was kind of really the only way for them to go.

Soaps.com: So now he’s getting involved with Lisa. What do you think of that dynamic?

Brandon Barash: I’m really enjoying it. I’ve said for a while when people asked me, ‘What’s your favorite storyline going on right now?’ My response always is the Lisa Niles storyline because [Brianna Brown] is such a great actress and she plays that part so well. She just plays it so earnest, which makes her come across even more crazy, as opposed to, you know, ninety percent of people would play that role just crazy, but she’s playing it from an earnest place, which makes the character more crazy, which I think it’s fantastic.

Soaps.com: Do you think Johnny helping Lisa goes along with, or against his character?

Brandon Barash: Well, Johnny's always got his hand in the mischief cookie jar, so I think it goes right along with what his M.O. is. I think that if he felt that at any time some innocent person's life was in danger, I think he would reconsider, but I think what he's doing is par for Johnny's course.

Soaps.com: Are there romantic possibilities for Lisa and Johnny?

Brandon Barash: It's Daytime, anything is possible. I think Johnny is drawn to her craziness, her nothing to lose attitude and I think he likes it. He likes playing with fire and so does she. It's an interesting combo.

Soaps.com: Is there anything you can preview about what's coming up for Johnny?

Brandon Barash: You know, I don't know. That's a really good question. We may see Johnny get involved in this Balkan storyline a little bit after the first of the year. We'll see. I don’t know much, I'll tell you that. That's me being honest, not me being coy.

To read the first part of our interview go to the General Hospital Interview: Brandon Barash Talks 2011 Soap Cruise.