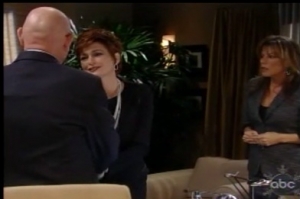 Nice to see you smiling. (Soaps.com)

General Hospital Rundown For The Week of December 13 – 17:

The big things to happen last week were Jerry’s return and The Balkan’s reveal. All in all it was a good week in my book, so let’s get to it.

The Balkan.
We all had our suspicions about who The Balkan would turn out to be, but no one knew for sure until the actual reveal. I was a little disappointed when Siobhan called Jerry The Balkan at the beginning of Friday’s episode because I thought it was way too obvious for it to be him. Besides, Jerry’s already got like 10 other identities, he doesn’t need any more. So, I was thrilled when Theo called Jerry at the end of the episode with a different accent and confirmed that he was in fact The Balkan. Being surprised in this genre is so rare, that it’s all the more exciting when it actually happens. I like that it’s Theo because he’s a guest star who was brought on with a purpose and will actually drive story. And his whole hypochondriac role of Theo was presumably just a ruse to cover who he really is. Not only does he now have ties to the hospital storyline, but also with Diane and Alexis, as Diane has lured him from the New York Office to work at their firm, and the whole Brenda/Sonny/Jason/Dante deal. I’m actually excited to see what Theo has in store for the good people of Port Charles, so, nice work GH. What did you think of the reveal? Tell us through our General Hospital Poll: Theo As The Balkan.

Jerry Jacks.
I love that he’s back, but I’m so disappointed that he’s only sticking around for a few episodes. While Jax is still trying to figure out how he lost the brother he loved, I honestly don’t care how evil and depraved Jerry’s gotten because he’s such a great bad guy. I think it’s his accent and his way of calmly, almost politely, threatening people that amuses me. He can come on, wreak havoc for no apparent reason and leave anytime he wants and I will be glued to my TV. Although, I’m not entirely clear why he loathes Brenda so much. Perhaps his hatred was just a way to throw us off track regarding The Balkan’s identity.

Secrets exposed.
Lucky got a call from Siobhan's sister saying she hadn't heard from her in weeks. He was understandably confused considering Siobhan has been pretending to talk to Fiona all while actually talking to The Balkan's men. I'm glad Lucky is catching on that there's more going on than meets the eye with his new lass, but I hope he doesn’t get too crushed. I don’t think he will though because I believe Siobhan actually has real feelings for Lucky. Hopefully, she's just being blackmailed into working for The Balkan or something, which Lucky will understand and then help her break free from him.

Cracking a smile.
Despite Carly's best efforts to derail Abby and Michael's budding relationship, Abby agreed to go on a date with Michael. Wasn't it nice to actually see Michael happy and smiling? I definitely would like to see more of that and hope Abby continues to be the reason for it.

Gratitude is sweeter.
Johnny continued to pull Lisa's strings when he delivered a sick, illegal immigrant in need of medical care to the hospital in order to authenticate her story for why she stole the meds. It was pretty impressive that he was able to find someone to fit Lisa's needs on such notice. I loved that Ethan got in on the act and helped Johnny taunt her regarding the situation. I'm sure Lisa still has a few tricks up her sleeve, but seeing someone get the upper hand on her was pretty satisfying.

Alaska bound?
After his night of long awaited sex with Brenda, Sonny decided to leave her in bed to hit the pier the next morning. I found that odd, but after talking to Luke, he ran into Claire, who told him she was being transferred to Alaska. She also added she was considering other options, but in my opinion, it wouldn’t be the worst thing in the world if she packed her bags and headed for The Last Frontier.

That's it for me this week. What did you think of all the goings on in Port Charles? Feel free to share your thoughts below.