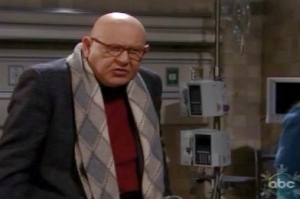 General Hospital Rundown For The Week of December 6 – 10:

I’m enjoying most of the new pairings in Port Charles and the newest disgruntled patient at General Hospital, but there is one couple who is getting on my last nerve. Let’s break it all down…

It’s over.
Last week started off on a downer note for Olivia, as she found Lisa with Johnny in what looked like a compromising situation. As Olivia took the scene in, she very calmly told Lisa to get off her knees and get out. I could not have loved that more. I was also thrilled that the writers wrote Olivia smart enough to figure out Johnny was lying to her about being with Lisa. As hot as Johnny and Olivia are together, I am looking forward to seeing where Johnny’s relationship with Lisa goes, as well as Olivia’s with Steve. Find out what Lisa LoCicero (Olivia) said about the break up through my Interviews: The House That General House Fans Built.

Back in love.
As Johnny and Olivia broke up, Sonny and Brenda found their way back to each other. I was digging them at first, but now they are seriously annoying me. They are being portrayed as two of the most selfish individuals, who only care about each other and to Hell with everyone else. Brenda actually said that Sonny was her priority now when Suzanne reminded her about a function she had to attend for her beloved charity ASEC. I was really enjoying Brenda’s return and the upheaval it was causing in everyone’s life, but her and Sonny’s reunion is too much for me to take. I cannot wait until Carly or someone else bursts Sonny’s bubble with news of Brenda’s past relationship with his son Dante. I honestly can’t believe Carly has held out this long.

On a bender.
Dante couldn’t stop thinking about Brenda so he went to Jake’s and hit the bottle. I thought Dominic Zamprogna did a good job of acting drunk and I enjoyed his scenes with Chad Duell’s Michael, who came to collect his soused brother. However, Dante’s feelings for Brenda are much deeper than I expected and it kind of feels like they are moving him away from Lulu, who should be more involved with this storyline. Brenda certainly doesn’t seem to care much about Dante when he’s not right in front of her, so I wonder where the writers will ultimately go with this.

Guest star.
Surly, hypochondriac Theo entered the lives of the medical staff last week and so far I’m enjoying him. I have no idea what plans they have for him, but he's clearly taken a shine to Robin and rubbing everyone else the wrong way, which is kind of fun to watch. I thought they sort of wasted Michael Learned as Shirley when she was on earlier in the year, so I hope they use Daniel Benzali more wisely and keep Theo on for some time.

Ulterior motives.
As Lucky continued to trust Siobhan in his quest to bring down The Balkan, the viewers learned that she was actually working for the villain du jour. I'm really digging them as a couple and this has added an interesting wrinkle in their burgeoning relationship. I'm hoping there's a good reason for her to be working against Lucky and that she actually does care for him, but even if that's not the case, my interest is definitely piqued and I can't wait to find out the whole story.

You're still here?
I'm disappointed Nikolas and Brook have so little screen time together. Nikolas has recently only been used to puzzlingly lend support to Lisa, but Brook hasn't been seen in some time. Her appearance in town has been so scarce that even Elizabeth thought she went back to Bensonhurst. Okay, that might just have been a jab at Nik's new interest. Speaking of Elizabeth though, what are they going to do with her? Since Rebecca Herbst has been back from maternity leave, she's barely had anything to do.

Young love.
Just when Michael finally asked Abby out, Carly walked in to see them together, which can only lead to disaster. I hope Carly doesn't ruin things too much because I find Michael so endearing when he's with Abby. Well, when he's not roughing her up or offering to pay her for her time that is. I do wish she would stop excusing his violent tendencies, as well, by taking the blame herself, but I hope she is on the up and up and that Michael can find happiness with her. He certainly deserves some.

That's it's for me this time around. What did you think of last week's General Hospital? Feel free to comment below and don't forget to vote in our General Hospital Poll: What Should Robin Do?