Catch Genie Francis in “The Note” this weekend 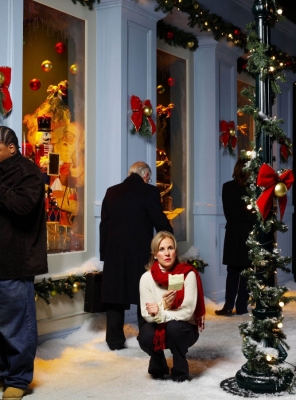 Weekends are usually odd for the fervent General Hospital fan. We either hang around the message boards hoping for a taste of Port Charles or re-watch the episodes from the previous week just to give us our fix – or both. But in the spirit of the holidays, the Hallmark Channel seems to have given us a gift this Saturday night – an original movie with none other than Genie Francis! Granted, she won’t be portraying our beloved Laura Spencer, but she’ll be healthy and vital and back her beautiful trim self. (Thanks to her Medifast endorsement deal. You can see this story at Genie Francis joins Medifast.)

Soaps.com has learned that Genie gladly traveled to Canada in September to film her lead role in “The Note”. It’s a heartwarming story about a love
advice columnist who finds a letter on the beach from a man who died in a plane crash. After reading it and learning that he wrote it to his little girl, she sets out to find a way to deliver the note before Christmas. She decides to enlist the help of her readers in tracking down the girl.

Genie reportedly knew this role was meant for her when she read through the script and noticed that her character places the star on top of the Christmas tree. Sound familiar? That's the last thing that Laura Spencer did before she checked herself back into a life of darkness at Shadybrook. Die-hard GH fans won't be able to resist a Saturday night in front of the tube watching Hallmark's "The Note." And, if you miss it at 8:00 p.m. E.S.T - you can catch it at various times throughout the month.

She may not be back in Port Charles (yet!), but spending even two hours with Genie Francis is sure to be a treat.

The Gift of "Face Time" for GH Fans