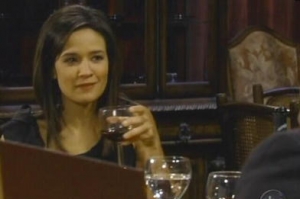 Setting herself up for failure (Soaps.com)

General Hospital Rundown for the week of October 18 – 22:

The stories this week slightly dragged in Port Charles, but I do see that they are headed somewhere that could be interesting. Here’s a rundown of some of the best and worst moments of the week.

Sonny and Claire, Take 2.
Just after trying to make a go of it again with Brenda, Sonny and Claire are hooking up again. Their date was interesting because Sonny flat out told Claire that if Brenda changed her mind about being with Sonny, he’d ditch Claire again! I guess Claire prefers a man who doesn’t mince words over romance. Claire also promised Sonny that she would not be using Michael to get back at him. They both looked hot for one another at their romantic bistro as they panted over their wine, but it’s tough to tell if Claire really wants Sonny or just wants him in jail. What do you think about this pairing? Vote in our General Hospital Poll: Sonny and Claire. Of course, their reunion might not have been possible without off-the-charts crazy Carly!

Crazy Carly.
Since Brenda has been back in town, Carly has been spinning more and more out of control. She has finally decided that she wants to be with Jax and despite his many declarations of love, it’s not enough for Carly. I was really appalled that she thought the solution to her Brenda problem would be sleeping with Jason. Luckily, Jason was sensible and told Carly to not give Brenda so much power. It was totally selfish of Carly to ask Jason to do this – what about Sam? Then after setting Claire and Sonny up, Jax arrived just in time to hear Claire tell Carly she doesn’t want to see Sonny with Brenda. I don’t think Carly is still hung up on Sonny, I think she just wants Brenda gone so she can be the center of the universe again. However, if she keeps up her silly schemes, she’s going to leave Jax wide open for Brenda to swoop in! Quit with the self-destruction, Carly!

The boys are back in town.
I’m glad Lucky finally got back to Port Charles so we can move ahead and see who The Balkan is and what he wants with Brenda. I liked seeing him and Nikolas interact together. These two still have a long way to go after what happened with Liz, but it was good to see Lucky lean on Nik, and Nik in turn want to help his brother. Nik also noticed that Siobahn might be responsible for getting Lucky back to his old self. I wonder what Liz will think of this?

You're giving me a heart attack
Luke faked a heart attack this week to get back into Tracy’s good graces. I loved that Tracy refused to help him, even though he might be on his death bed. What I can’t understand is how Maya would jeopardize her own medical career to help Luke out with his scheme? It was also interesting that Lulu didn’t call Luke out when she’s always busy doing the same to others as she rides through Port Charles on her high horse.

The World revolves around Brenda.
It is still the Brenda show. We got a few more glimpses of Brenda’s relationship with Dante, but still aren’t sure what exactly went down between the two of them. Olivia pointed out that she hasn’t seen Dante so brooding since the time he was working with Brenda. I can’t wait to find out! While Carly did annoy me this week, I loved her showdown with Brenda. These two didn’t hold back at all and I loved every minute of it. I actually agreed with what they both were saying about one another! It was fun and I hope to see more of them together.

Thanks for reading my thoughts on the week! Let me know what you thought about all of Port Charles' happenings below and follow Lori on Twitter @LoriKWilson for all the latest General Hospital scoop!