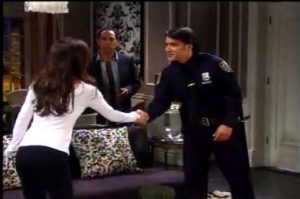 A villain with promise. (Soaps.com)

General Hospital Rundown for the week of October 11 – 15:

The Balkan and Brenda are infiltrating almost every storyline in Port Charles, but I don’t necessarily see it as a bad thing. Sure there are things I don’t like, but overall my interest is piqued and I feel like we have a genuine mystery on our hands.

Who is The Balkan?
Since Sebastian Roche returns as Jerry Jacks in December, my bet is on him. He’s had 1,000 other identities on this show, so why not one more? Considering I don’t trust Suzanne at all, which is just a feeling and not based on any secret knowledge that I have, I think she is working with him in some way. The Balkan’s presence is affecting almost every storyline on the canvas, which is okay with me because I enjoy umbrella storylines and it’s genuinely up in the air as to who he or she could be. I am intrigued and looking forward to finding out who this person is and what they have on Brenda.

Brenda, Brenda, Brenda.
Yes, she is also involved with most everyone on the canvas as well, but now that she’s back in Port Charles I’m enjoying the new energy she’s bringing. Of course, I’d like the men in town (Max, Milo and Spinelli) to stop acting so immaturely around her, the women (Carly, Sam and Maxie) to stop acting like insecure messes around her and she really does need to stop going to Sonny to tell him she won’t be coming to see him anymore, but she makes Jason more entertaining and her secret with Dante is grabbing my interest. I’m not sure if my super soap senses were on the fritz, but I totally didn’t see Dante having a connection with Brenda coming. Surprises these days on soaps are a good thing and I can’t wait to find out what they are keeping secret. What do you think it is? Vote in our General Hospital Poll: Brenda and Dante’s Secret.

Pot meet kettle.
Carly telling Jax he couldn’t see Brenda anymore was really something. Apparently she’s forgotten how many times she’s slept with Sonny since she and Jax have been together. Thankfully, Jax stood up for himself and pointed that very fact out. Her excuse was that she and Sonny have kids so it’s different, but if she expects Jax to stay away from his past, then she needs to do the same.

She's back.
Logically, Lisa returning to work at General Hospital makes no sense, but it's a soap so I will ignore the obvious reasons why she wouldn't be allowed back and/or should be in jail right now. What I will concentrate on is how I like that Lisa isn't a broken, simpering mess after she was sent to Shadybrook. She is acting like nothing happened and that she is the victim of her long ago love for Patrick. As long as she remains strong, confident and somewhat based in reality, she could turn out to be a really fun villain to watch for some time to come.

When in Rome.
I think that's where Siobhan and Lucky are now, or at least they are on their way to Rome. I'm just really happy Siobhan has gotten rid of that darned hat. It seems to have given her some extra confidence, as she flat out told Lucky she didn't want a future with him, she just wanted to sleep with him. I love a girl who knows what she wants and I kind of respected her more after that. Although, like Suzanne, I still don't completely trust her just yet.

Falling on the wrong ears?
I'm glad Luke and Tracy are mixing it up again, but it's still hard to believe him when he pledges his love to her and states his desire to marry her for real. As much as I like them together and am not a Luke and Laura fan, I still feel he should be making those declarations to Laura.

If you missed any of last week's episodes, check out our sister site Soap Opera Fan Blog's General Hospital Weekly Summaries and vote in our General Hospital Polls. For more General Hospital, other soap opera, Glee, Grey's Anatomy and Vampire Diaries news, follow us on Twitter @soapoperafan and join us on Facebook.