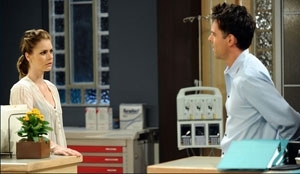 How do they know each other? (ABC)

General Hospital Rundown for the week of October 4 – 8:

This week Michael struggled with some major issues, the women of Port Charles took center stage and a major development was revealed on Friday. Let’s dish on what went down.

It’s over, or is it?
The police finally caught up with Lisa and whisked her away to a mental institution to get the medical help she needs. Thank goodness. What I do like is how realistic Robin is being about her relationship with Patrick. She calmly told him that while she loved him, she needed space. I think that’s an honest reaction. She also admitted to herself that she needed to figure out her role in why Patrick cheated. She knows she had been romanticizing her past with Stone, and now that she’s figured it out, perhaps she will have it in her to forgive Patrick and move forward. I’m not excusing what Patrick did, but I admire Robin’s maturity this week and her not immediately throwing in the towel on their marriage.

Sex Education.
Whatever therapist Robin has been seeing for her sage wisdom might need to pay Michael a visit. The poor guy can’t catch a break! He met a girl that he liked and asked Jason for help with finding him a girl to have sex with so he’d be skilled in the real thing. It was a bit odd that Sam hooked him up with someone to help Michael relearn his carnal senses. Michael was unable to even have his shirt removed. He definitely needs real help. With all that he has been exposed to, how can he possibly make a good partner right now?

He loves me, he loves me not.
Sonny finally admitted he would like Brenda back, but doesn’t want to go through all that pain again. That’s a very wise concern-Sonny and Brenda have had a train wreck of a time together. Sometimes love just isn’t enough. I am happy that Sonny was honest with Claire and didn’t continue to string her along. Claire handled his honesty well, but I wonder if his rejection will spurn her to prosecute him again?

The women of Port Charles.
It was fun to watch the different dynamics of the women in Port Charles this week. Lisa had a breakdown, catfights and territorial disputes went down between Olivia and Kate, Carly and Brenda, and Diane and Suzanne. Meanwhile, girl power was displayed in friendships with Brenda and Robin and Lulu and Maxie. I really like seeing the women not scared to throw down. I loved when Olivia removed her earrings and was ready to drop cousin Kate. These women don’t need the mob to protect them! How do you prefer the women of Port Charles to behave? Vote in our General Hospital Poll: The Women Of Port Charles.

This and That.
Carly gave Jax an ultimatum that if he loved her, he would stay away from Brenda. How many ultimatums is she going to issue him? If she doesn’t watch it, she’s going to push him away for good. I loved it when Alexis begged Claire to use a condom when discovering she’s been canoodling with Sonny. Finally, the big reveal of the week-Dante and Brenda already clearly know one another! The question is, how and what do they mean to one another? I can’t wait to see what this means for Brenda and Sonny, Dante and Lulu and Sonny and Dante.

Thanks for reading my thoughts this week. Lori will be back next week. Let me know what you thought about all of Port Charles' happenings below and follow Lori on Twitter @LoriKWilson for all the latest General Hospital scoop!